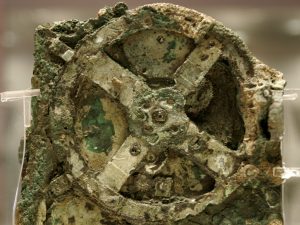 Although the artifact was recovered back in 1901, new technological advances have helped archaeologists learn even more about an ancient Greek analog computer that is over 2,100 years old.
It turns out that after the latest examination, the Antikythera Mechanism, which is believed to be the earliest surviving mechanical computing device, was actually used to help teach Greeks about our place in the cosmos.
Originally found in the remains of a shipwreck of an ancient merchant ship that is believed to have sunk between 150-70 BC, the artifact was layered in mud and thought to have been of little importance compared to the statues, jewelry and coins that were discovered as well.
It wasn’t until one year later in 1902 when Valerios Stais, the Director of the National Archaeological Museum in Athens, took notice of the great embedded in a rock. Stais believed it to be an astronomical clock, which was dismissed due to the preconceptions of technology only adapting to be able to make such equipment in the 14th century.
It would be another half-century before Stais’ theory was validated in 1951 by Yale professor and science historian, Derek de Solla Price when he built a working model from high-resolution pictures obtained by gamma and x-ray technology. His model showed the mechanism and its 30 gears to be capable of accurately predicting the paths of the Sun and the Moon.
Just last week modern technology has taught us even more about this ancient machine. According to the Associated Press, after “more than a decade’s efforts using cutting-edge scanning equipment, an international team of scientists has now read about 3,500 characters of explanatory text.”
Researcher Adam Jones, a professor of ancient history and science at New York University and a member of the research team examining the artifact, told the AP that the previous notions that the text written in millimeter-size characters across the bronze and tin surfaces of the ancient analog computer shows that a set of instructions was in fact incorrect.
“It’s like a textbook of astronomy as it was understood then, which connected the movements of the sky and the planets with the lives of the ancient Greeks and their environment,” Jones said.
There are at least 20 more gears to the machine that have yet to be recovered and are thought to still be lost at the bottom of the Mediterranean Sea.