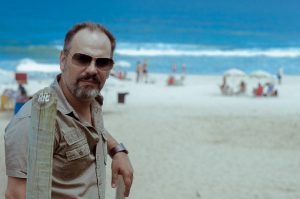 Residing in Rio de Janeiro since 2008, Greek theater director, Sotiris Karamesinis has managed to stage three Greek tragedies in Brazil and incorporate his own acting technique known as MUSA (musical system of acting), which he bases on the art of ancient actors.

For his first drama production in Brazil, in 2008-09 he collaborated with the legendary theater group “Nós do morro” (we from the hill), a troupe composed mostly of Afro-Brazilian origin. This was the first attempt ever made to introduce a Greek tragedy into Brazilian community theater.

“I chose to teach and explore The Bacchae with them, because the culture they bring from their homes is Dionysian, their relationship with their acts and the music is organic and immediate. Even the fact that their perception of ancient tragedy was close to nonexistent, it worked favorably in this case; eager and impulsive, they were the best people for this and conducive to my vision for this tragedy,” Karamesinis told Greek News Agenda.

Karamesinis has cultivated Greek drama in Brazilian society unlike never before. He not only directs theatrical performances, he also teaches drama in schools and universities and masterclasses on his unique MUSA method to prep actors for film, theater and television.

He also holds the titles of Research Associate at the Strategic Communication and News Media Laboratory in the International and European Department of the University of Piraeus and at the Center of Literature and Arts of UNIRIO University, Rio de Janeiro.

When describing his acting method, MUSA, Karamesinis says that the process came to him after many years of research regarding Greek tragedy and it’s relationship with music.

“MUSA is a method of exercise…using music as a driving power and catalyst. It is an autonomous and holistic acting method, mainly focusing on learning how to use music as the backbone of an actor’s composition of scenes or monologues. This process leads to an organic creation and presence, enriching expressive means and facilitating the emotional readiness required for a unique artistic composition per role, not through a psychological but through a psychotechnical process.”