GRNews
GreekReporter.comGreek NewsEconomyTsipras Speaks of Growth While Companies Shut Down One After the Other 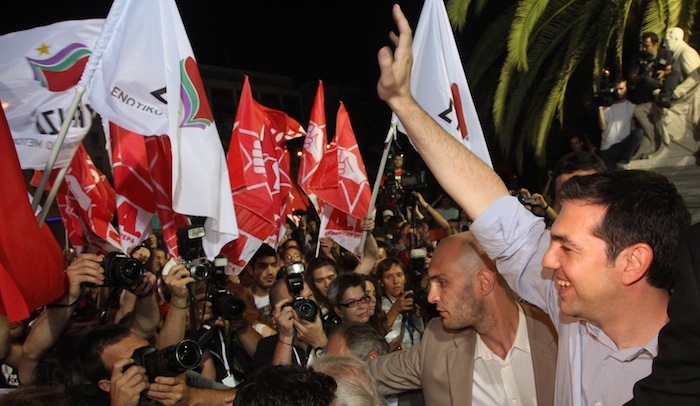 One month ago it was Elektroniki Athinon, the biggest Greek owned appliance chain, yesterday it was Athens Ledra Hotel, former Ledra-Marriott, today it is Pyrsos Security, all big and respected names in their respective sectors. They all shut down, unable to continue in the business-hostile environment the Greek government has created with the new policy: “tax everything that moves, and if it doesn’t move, tax it until it moves.”
Pyrsos Security, a company operating for 22 years and employing almost 800 employees, terminated its operation on Monday, adding a few hundred more to the vast army of the unemployed. Reportedly the company had stopped paying employees and suppliers for almost a year. It is the latest in a long line of Greek businesses that didn’t make it in recession times.
The resurrection of the Greek economy along with the Resurrection of Christ that Alexis Tsipras promised before Easter was another one of his “illusions.” He said it himself in parliament: “You cannot accuse us of lying, you can accuse us of having illusions,” he blatantly said, with a slight arch of his eyebrows, the standard expression he assumes when he wants to play serious. He called his lies and false promises, illusions. And his MPs applauded, while Greek people were watching with open mouths, unable to believe that this man came to power promising everything and delivering absolutely nothing, so far.
After his admission of being prone to illusions, and after signing a memorandum of such austerity measures that would make the most cold-blooded neoliberal cringe, Tsipras kept on speaking of growth, of Greece turning the page, of the end of austerity, of return to dignity, of an economy returning to normal.
At the same time, the government doesn’t seem to shed a tear for the newly unemployed of the above businesses. If one brings to mind last year’s theatrical performance staged outside the finance ministry when the SYRIZA administration rehired the 150 cleaning women who had been laid of by the previous government, they would notice that there was no reaction whatsoever from the side of the government. This was another sign for the government’s blatant disregard to what happens in the private sector, or in the real economy in general.
The harsh bailout measures decided by Tsipras and company had only one thing in mind: to protect the public sector wages and pensions. In essence, to protect the pool of SYRIZA voters, created mainly by hiring party members left and right, or handing out early pensions to lure voters. In public they shout that it was the bad Europeans and the evil IMF who imposed austerity measures, but in reality they are the ones who decided to create a state-based economy that would allow them to govern a populace that is getting poorer and poorer. And the lies they tell Greek people are getting bigger and bigger. The last one being, “the next loan tranche will go to the real economy” when everyone knows that the money will go to loan repayments and public sector wages and pensions because state coffers are empty.
Tsipras’ cabinet and MPs go on television and talk about reforms that would protect the poorer social strata and leave the tax burden to the “rich,” the rich being those who make over 20,000 euros per year. A SYRIZA lawmaker who also writes for party newspaper “Avgi” wrote an editorial that said the government wants to put the tax burden on those who voted pro-Europe in last July’s fiasco of a referendum. Another MP proudly declared on television that the measures are only for the benefit of the poor social class. One is to assume that the rest can go to hell, as far as SYRIZA is concerned.
Yet, the prime minister has the audacity to speak about attracting foreign investments in Greece and travels abroad in order to lure investment capital. Meanwhile, pertinent ministers dispute publicly privatization deals that have been signed and sealed. The best example being the shipping minister who claims the purchase of the majority stake of Piraeus Port by Chinese company Cosco is not finalized yet, when he, himself, and the prime minister signed the agreement in an official ceremony. And the minister’s rhetoric prompted a dock workers’ strike.
After the absurdity of the Piraeus Port privatization, one wonders how Tsipras would lure Chinese investors when he visits Beijing on July 2. Unless, of course, he believes the Chinese businessmen will be gullible enough to buy his “illusions.” Because as it is here in Greece, his non-partisan voters have stopped believing him.