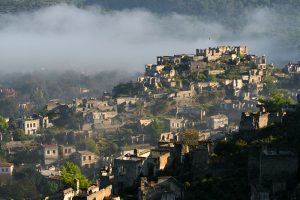 The town of Levissi (known as Kayakoy) was once a bustling Greek Orthodox community. Greeks of the 5,000-year-old village were ethnically cleansed and then forcibly expelled in 1922, causing 10,000 people to leave behind the land of their heritage. American filmmaker Joerg Schodl set out to document what is left of the ghost town in his documentary, “Ghosts of Levissi.”

Schodl tells the tale of the small Greek community in Asia Minor that was torn apart during the final days of the Ottoman Empire. It focuses on the disappearance of the population practically overnight thanks to campaigns, designed to scare Greeks from Levissi and nearby Macri (known as Fethiye), included offensives by Turks. The site Greek Genocide reports that women were raped and their clothes and shoes taken from them.

Since then, the homes have remained vacant, left to decay after being further damaged by a huge earthquake in 1957. Houses and churches in the area have been used for summer festivals, however plans to lease the area and auction it off for commercial interests have caused local Turks as well as Greeks with roots in the area to protest. They are worried that the investors could further ruin the authenticity of the area.

When making the film, Schodl had the help of members of the Greek community in Melbourne, Adelaide, Sydney, Perth and Brisbane and he was able to find thirteen descendants of Levissi families. More descendants were found in Toronto, Rhodes, London, Athens and Istanbul.