GRNews
GreekReporter.comGreeceTwo F-16s Approach Plane Flying Over Athens FIR After Not Responding to... 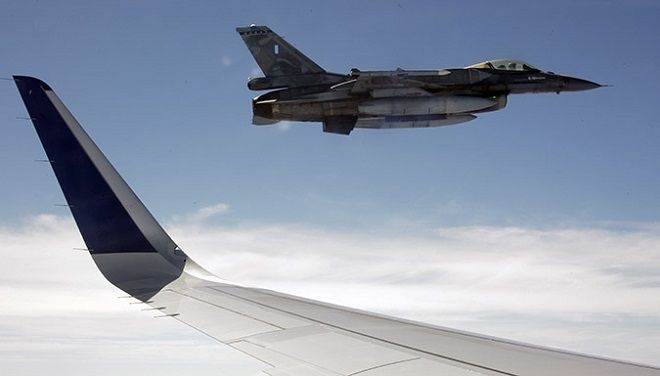 Several hours after the A320 EgyptAir incident took place close to Karpathos, a new incident took place on Thursday night in the Athens FIR.
As Alpha TV station reports, an American Airbus that had departed from France and was headed to Kuwait carrying 140 passengers, flew for several hours without anyone being able to contact the pilots.
The aircraft entered the Athens FIR at 7:10 p.m. and the crew onboard did not respond to any of the calls by the Hellenic Civil Aviation Authority. Consequently, two F-16 aircrafts took off, in order to contain the aircraft.
The Greek pilots said that their colleagues on the Airbus were in their regular positions and appeared to be sleeping, Alpha television reports. The presence of the two fighter-jets became known by the flight-attendants and the passengers, who realized that something was out of the ordinary, and woke up the pilots, according to Alpha television.
As soon as the pilot of the Airbus saw that the two Greek fighter-jets approached him, he opened back his signal and at 8:10 p.m. the Airbus exited the Athens FIR, with the Greek fighter-jets returned to their base.