Shackled Skeletons Might Tell Story of Rise of Ancient Athens 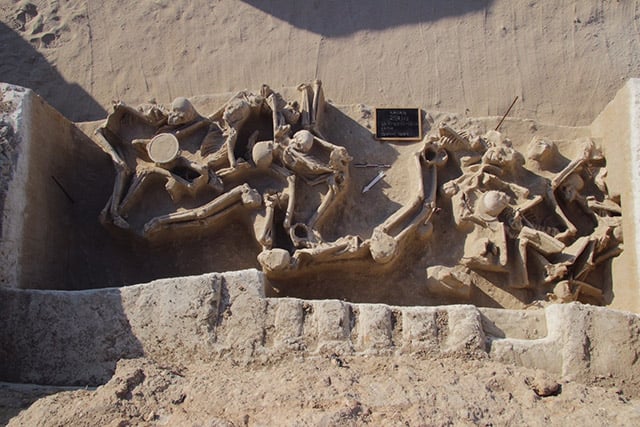 Archaeologists are to study shackled skeletons found at the ancient cemetery in the Faliro port city in order to understand the rise of the Athens city-state.
According to a Forbes report written by Kristina Killgrove, Faliro cemetery is one of the largest excavated in Greece, containing more than 1,500 skeletons and dating to the 8th-5th centuries BC. Skeletons of people with their hands shackled behind their backs in mass graves are considered important in understanding the policies of Athens at the time and how the city-state was established.
Excavations of the graveyard in Faliro started a century ago. But large-scale work was carried out between 2012-2016 by the Department of Antiquities of the Hellenic Ministry of Culture, led by archaeologist Stella Chrysoulaki.
Several skeletons removed in blocks for future micro-excavation. Digitization of the archaeological field records, photographs, and maps is done. However, preservation and analysis has to be done by specialists in bioarchaeology and forensic anthropology.
The report says the skeletons found were buried in a variety of ways. Most were interred in simple pit graves, but nearly one-third are infants and children in large jars, about 5 percent are cremations complete with funeral pyres, and there are a few stone-lined cist graves. One person was buried in a wooden boat used as a coffin.
The shackled skeletons have puzzled researchers as there are very few instances of shackled deaths in the ancient world and could indicate punishment, slavery, or a death sentence.
Examining and analyzing 1,500 skeletons by bioarchelogists and geoarchaelogists is a time-consuming and costly process and significant funding is needed.
The research team believes that the analysis of the skeletons can give us a window into a critical time in ancient Greek history, just before the rise of the city-state. The four main objectives following conservation of the skeletons:
1) To investigate the shackled and other deviant burials, including the individuals tossed into mass graves and decide whether they are a casualty of the political upheaval that preceded the rise of Athenian democracy.
2) To study the burials of children,  to learn more about infancy and childhood in the ancient world.
3) To learn more about people’s diet in this ancient city, and to find out if its inhabitants succumbed to diseases easily passed through sailors and other travelers from distant lands.
4) To go beyond the analysis of elite individuals buried with elaborate grave goods by focusing on the more simple burials, to shed light on all social classes of ancient Athens.
Heads of the Faliro Bioarchaeological Project are bioarchaeologist Jane Buikstra, founding director of the Center for Bioarchaeological Research at Arizona State University, and geoarchaeologist Panagiotis Karkanas, director of the Wiener Laboratory at the American School of Classical Studies at Athens.
The two researchers aim at making project accessible through a website that would also include summary blog posts, photos, and preliminary results. Public talks around the U.S. are planned, as well as Wiener Laboratory open-house, school, and museum events in Athens.
They also plan to make the database available to researchers around the world. This will allow bioarchaeologists to use cutting-edge analytical methods, such as ancient DNA and isotope chemistry, in order to tell the important stories of the people of ancient Faliro.