From Ataturk to Venizelos 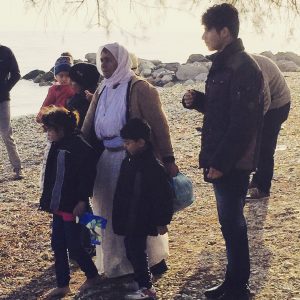 MYTILENE, Greece – Crossing the Bosporus from Istanbul to Athens with a university colleague – one the daughter of Turkish immigrants, the other the daughter of Greeks – transported us through a poignant wormhole of parallels between the 20th century Asia Minor abattoir and its 21st century Syrian War equivalent.
A research and relief mission to Lesvos exposed how history’s dictums are so often forgotten. As global political guardians wrestle the Gorgonian humanitarian crisis consuming the Eastern frontier of Europe’s Aegean border, their fissured, flawed and negligent interpretation of history compounds the human suffering and confounds their efforts. The 1914-1923 wars and genocide that ended the Ottoman Empire are a syllabus for understanding Oriental and Occidental ideologies on the subject of national identity and immigration. Borne of the compulsory exchange of millions of Greek Orthodox Christians from Turkey and the admission into Turkey of Sunni Muslims from Greece. The markers of nationalism and cultural identity codified during that period stained the ancient sea and soil sustaining our era’s migrant catastrophe. The statesmen Kemal Mustafa Ataturk and Eleftherios Venizelos curated the history so important in defining the modern identity of their countries and the region that today the Athens and Istanbul airports bear their names.
Brussels should visit more often.
Ending the modern refugee crisis that has consumed Europe presupposes abandoning entrenched sociopolitical paradigms regarding the integration of refugees arriving from Turkey. The suffering on Lesvos – Europe’s 21st century Ellis Island – reveals Europe’s pantomime of diplomacy as a failure of imagination and policy, not the Union’s capacity to accept migrants. Economic and political agendas supersede protecting human rights; threatening millions of innocent civilians and metastasizing into a mosaic of xenophobic nations on the brink of dismantling the United States of Europe Schengen promised.
Global powers share culpability. The Faustian terms of a November 2015 agreement between the EU and Turkey requires Turkey break cemented nationalist ambitions of cultural homogeneity by integrating Arabic-speaking refugees within Turkish society. In exchange, Turkish citizens will be granted visa-free entry into Schengen in October 2016. So far, this appears unlikely.  European Commission President Juncker clearly expressed Turkish accession into the EU is “unlikely” a reality further reinforced by the recent Kurdish PKK group’s unrelenting terror attacks in Ankara and Istanbul.  The UN has warned that the EU’s latest compromise of returning “irregular” migrants back to Turkey in exchange for further political and financial concessions is illegal and inhumane. While Greeks have demonstrated extraordinary generosity in welcoming refugees – earning them a Noble Peace Prize nomination – Greece ceded political sovereignty when accepting the endless Icarusian punishments of calamitous austerity. Greece is but a pathway to Western Europe for the 64,000 refugees facing closed borders, and for the foreseeable future, the “Jordan of Europe.” NATO ships patrolling the straights between Greece and Turkey, ostensibly to protect refugees, prevent them from entering Europe. As Washington and Moscow play politics in a war that a fragile ceasefire has only now paused.

While new reports of suffering in the Northern Greek village of Idomeni consume global media, the armada of rafts continue arriving on Lesvos. New migrants strain the island’s overflowing camps and overwhelm NGOs. Volunteerism is well-intentioned, filling the gaps of Europe’s failed response. But it is oftentimes uncoordinated and chaotic in processing migrants. Several European governments have criminalized volunteer efforts. Greece has begun refusing volunteers without official papers.
Within 15 minutes of my arrival on the island, a raft carrying old women, infants, and teenage children also arrived, adding to the one million destitute, desperate and dejected refugees. Buses that once carried tourists across the island now shuttle refugees to the concentration-like Moria Camp. The coastline and villages of Lesvos are dotted with makeshift warming centers, anarchist settlements, and the white tents of internment camps. The remote corners of the island are now dumps for the hundreds of thousands of abandoned life vests and boats, chilling graveyards of Middle East mayhem.
The residents of Lesvos – many themselves children of Greeks who fled Asia Minor in the 1920s – clean beaches and roads of this heart-wrenching debris. Grandmothers open their homes. Fishermen forgo their livelihoods to prevent the Aegean from swallowing more refugees. There is a poetic irony in empathetic Greeks, whose own country is bankrupt, opening their homes and hearts in this most fundamental expression of shared humanity; a justifiable source of pride for all Greece.
The crisis has wreaked a havoc of consequences on the island. The Aegean is tainted. Many no longer take their afternoon swim. Others refuse to eat fish feeding on corpses. The tourist economy has been devastated. The emerging pornography of disaster capitalism exploits refugees and outrages locals. The enormous Venizelos that ferries daily between Lesvos and Athens has refugees paying hustlers ticket prices 50% higher than Greeks. Outside the Moria Camp, lines of canteens sell fast food and vendors sell SIM cards. Along the port’s promenade, roasted chickens that sold for €5 now sell for €10 and enterprising restaurateurs removed pork from menus to assure devout Muslims purchase other meats. The islanders have become economically hardened, politically cynical, and ethnocentrically suspicious, claiming aid groups are profiteering at the expense of Greeks. Calculating financial losses is a matter of mathematics. Determining the spiritual toll is far more difficult.
A Greek mother shared her experience when an overloaded dinghy arrived on the coastal village of Skala Sikamineas. Everyone congregated around a woman who was feared dead. She was in fact giving birth. During the panic and joy of that scene, she explained how she begged her Turkish smuggler to return her family’s money after going into labor on the Turkish coast. He refused, pointed a gun at her belly and forced her onto the dingy. “Give birth to your child in Greece so he’ll get European citizenship,” he instructed.
The Greek mother was crying as she shared the story. “No woman lies when giving birth. Birth is the greatest truth. I hope her child is healthy.”
New life amidst an old clash of civilizations.