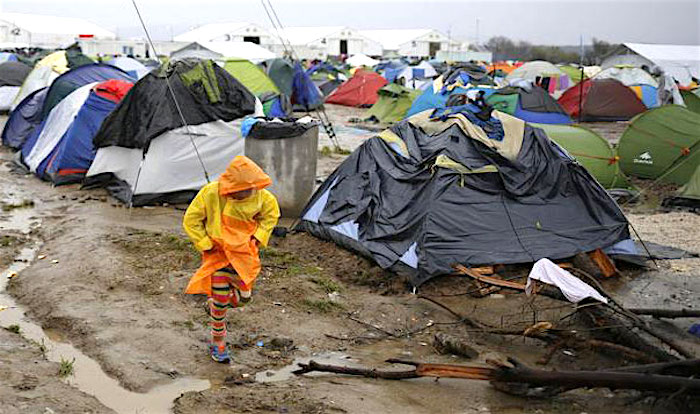 Greece has begun refugee transfers from the Greek border town of Idomeni where some 13,00 people are stuck after Balkan countries completely sealed off the migrant trail as part of an EU plan, although Germany has publicly denounced the decision as cruel, unethical and in violation of EU rules.
The evacuation is slow and difficult since most refugees and migrants seem determined to make their way to the core of the continent, but it has been the horrendous conditions facing thousands of people in what has been properly called a “jungle-camp” that ultimately forced the Greek authorities to begin an evacuation process.
The sight of people buried in water and mud and a mother forced to wash a newborn baby in a puddle speaks volumes of Greek administrative inefficiency and makes a mockery of EU’s pledge to human rights and human dignity.
In the meantime, Greek authorities have said they won’t use tear gas to evaluate people, but this is a nearly laughable statement coming from a country whose police units use tear gas to disperse protests and demonstrations on every single occasion.
The Idomeni refugee camp represents a national disgrace for Greece, but the real blame is on Europe itself – on the xenophobic, backward thinking, and racist Balkan governments and on eurocrats on the whole.
It is customary to speak of the flawed architecture of the European Union when it comes to lack of effective policies in tackling the refugee crisis, but the eurocrats have no problem displaying “efficiency” and sheer determination when it comes to imposing and enforcing brutal austerity policies on the indebted Eurozone member states and to seek to convert southern Europe – with Greece as the primary guinea pig –into a neoliberal laboratory.
Former German Labor Minister Norbert Blum, who visited the Idomeni camp, has described the degrading conditions under which refugees live as an “attack on humanity.”
He is absolutely right.
As Mr. Blum himself said, the conditions in Idomeni are “a disgrace to civilization.”
Like it or not, Europe has a moral and legal responsibility for people in need of international protection.
International law says so, and international law cannot be served when it is in one’s own interest and advantage and disregarded when it is not.
Without international law, nations can easily succumb to violations of human rights and the temptations of brutality and oppression.
Like it or not, it is institutions like the UN and the spirit represented by international human rights organizations and other similarly minded agencies that prevent us from falling completely into the abyss.
Austria and the Balkan states that have opted to seal off EU’s external borders are enforcing a policy that will not solve the refugee crisis, but the stigma of racism and misanthropy will tarnish their identity for a long time to come.
EU’s customary of “wait-and-see” tactics and “kicking the can down the road” approach have a strong aversion to workable solutions for the benefit of average citizens, as Greece can easily testify.
Like it or not, Europe has enough resources to offer shelter to refugees from war-torn regions of the world, particularly since most of the people fleeing to Europe are citizens of countries which are victims of western crimes.
Berlin-based Chinese artist Ai Weiwei, who put on a performance in the Idomeni camp the other day, allowing a young Syrian woman to play the piano in the midst of dreadful conditions intended to shame the EU over refugee haggling.
Weiwei and the Syrian woman did shame the EU, as the performance was a recognition that refugees are humans, and should not be used as chess pieces in the exchanges of the political elite, who were elected by the people, and purportedly tasked to help them.
And if German philosopher and cultural critic Friedrich Nietzsche were alive today, he might add that, having already spent too much time gazing at the abyss over the refugee issue, the abyss is now gazing into Europe.