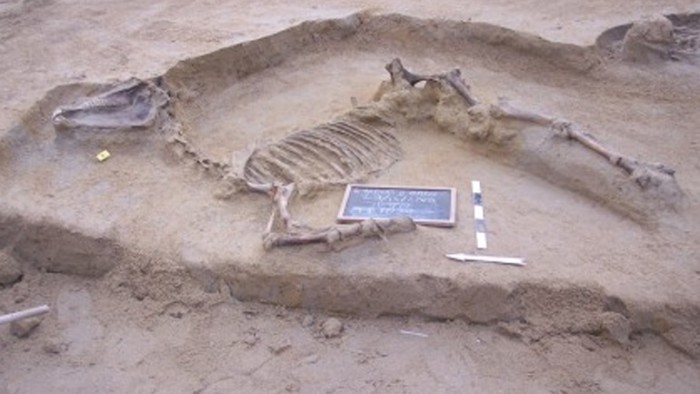 A burial site containing an unusually well-preserved horse skeleton, intact even down to the hooves, was among the findings discovered during landscaping works around the Stavros Niarchos Foundation Cultural Center at the Faliro Delta, a prime tract of land in southern coastal Athens, Greece, which previously hosted the country’s only pari-mutuel horse track. The skeleton was presented to the Central Archaeological Council during a session held on Tuesday, with members stressing its importance.
“In the Faliro necropolis, we have found four complete horse graves, as well as parts of other skeletons, therefore, it is not something rare for the area. What is rare and surprised us was the degree of preservation of the specific skeleton, which even has its hooves. For zoo-archaeologists or a university, this find could be an excellent opportunity for a study. Having such a large number of skeletons – four is quite a number – such a study could reach a number of conclusions on the breeds and the evolution of the species. From this point of view, this discovery is very important,” head archaeologist Stella Chrysoulaki explained.
She noted that burying horses in a cemetery for people periodically occurred, while it was not strange for the Faliro necropolis, “where unbelievable things happen.” She noted that it was a cemetery stretching from the Archaic era to the Classical era, containing many strange and unusual findings.
One such was the discovery of two skeletons, possibly of a couple, lying with their hands clasped. This indicated that they actually died together, since rigor mortis did not allow other conclusion, she said.
A total of 136 burial sites dating back to the Archaic era had been found in the 840-square-meter ancient cemetery, including the horse burial site and sections of a mass grave, burial urns and other findings.
The Central Archaeological Council approved continuing construction works over the discovered structures, which mostly consisted of ground holes, while the skeletons were removed for study. Proposals were made to display and highlight some of the findings at the cultural center.
(Source: ANA-MPA)