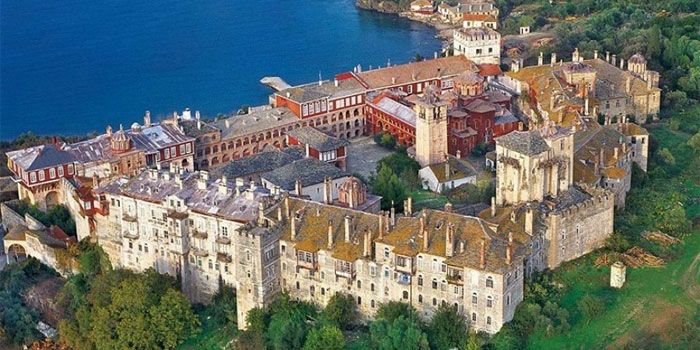 In 2016, Russians will celebrate 1,000 years since they first arrived and settled on Mount Athos, Greece. Numerous events both in Greece and Russia have been organized in order to celebrate this significant anniversary.
According to Greek media, the official celebration will start with liturgical celebrations on Mount Athos on May 18 to 20, 2016. This is due to the fact that on May 20 (May 7 according to the old calendar) the Orthodox Church celebrates the memory of the “father of Russian monasticism,” St. Anthony of the Caves.
Of the 20 monasteries located on Mount Athos, the brethren of 17 are predominantly ethnically Greek, while the brethren of the other 3 are monks of primarily other origins, who become Greek. St. Panteleimon Monastery, also known as Rossikon, is an Eastern Orthodox monastery built on the southwest side of the Mount Athos peninsula in northern Greece. It does have historical and liturgical ties to the Russian Orthodox Church; nevertheless, like all the other monastic settlements on Mount Athos, the monastery is under the direct ecclesiastical jurisdiction of the Ecumenical Patriarchate of Constantinople.
The monastery was founded by several monks from Kievan Rus in the 11th century, which is why it is known as “Rossikon.” It has been inhabited by mainly Russian monks in certain periods of its history. It was recognized as a separate monastery in 1169.