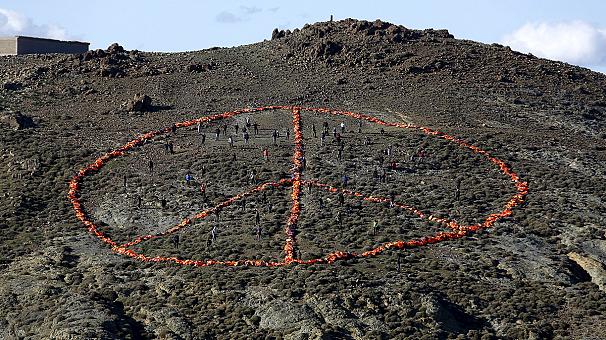 Volunteers from various non-governmental organizations located on the Greek island of Lesvos sent their own New Year message in a unique fashion. They collected more than 2,500 life jackets left behind by the refugees arriving on the island in search of a new hope. After gathering all the life jackets they set them up on the island’s mountain top to look like the symbol of peace.
International Artist Brings Hope to Lesvos
Chinese contemporary artist Ai Weiwei set up a studio on the Greek island of Lesvos to highlight the tragic humanitarian crisis. During a press conference hosted on New Year’s Day, the artist spoke about Greece, a country that accepted refugees with open arms and saved their lives.
He also praised the people on the island for their understanding of the tragic situation and for “being very helpful and very tolerant.” However, he stressed that the island residents and volunteers only have a limited amount of resources to address the crisis.
“The refugees never end”, said the Chinese artist. It’s not something new, but right now the crisis in Greece has taken historical dimensions, he added. All people need to understand what is happening in Greece, in order to help the country and the refugees have a better future.
“A lot of people have lost their lives under the waves… we need a memorial,” Ai told Agence France-Presse. “Next year we are going to be involved with different projects,” he said, adding that his workshops in China and Germany as well as a number of his students would be involved.
“This is a very historical moment from any perspective. As an artist I want to be more involved, I want to [create] artworks in relation to the crisis and also create some kind of consciousness about the situation.”
“It’s very important to come and be part of it,” Ai said.