The first modern-day Olympic Marathon winner at the 1896 Summer Olympics Spyros (Spyridon) Louis will be featured on around 750,000 new €2 coins that will be released later this fall issued by Greece. This marks the 75th anniversary of the athlete’s death, who passed away on March 26, 1940, at the age of 67.

The new €2 coin, designed by Greek artist Georgios Stamatopoulos, will host Spyros Louis and the six inches tall silver cup he received during his 1896 victory, against the background with the Panathenaic Stadium.

The coin’s outer ring will depict the 12 stars of the European flag, while inscribed along its inner edge will be the country of issuance the “Hellenic Republic” and “75 years in Memoriam of Spyros Louis” in Greek.
The Greek water-carrier Louis, who was born in Marousi, a suburb to the north of Athens, became a national hero once he crossed the finish line in the roughly 40K course from Marathon to the Panathenaic Stadium in 2:58:50.The same route was believed to have been taken by Greek messenger Pheidippides in 490 B.C. setting off wild public celebrations. 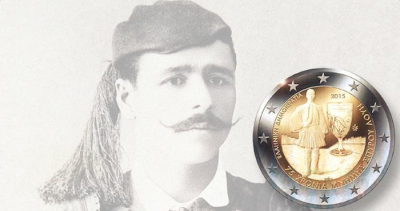 “Here the Olympic Victor was received with full honor; the King [George I of Greece] rose from his seat and congratulated him most warmly on his success. Some of the King’s aides-de-camp, and several members of the Committee went so far as to kiss and embrace the victor, who finally was carried in triumph to the retiring room under the vaulted entrance. The scene witnessed inside the Stadium cannot be easily described, and even foreigners were carried away by the general enthusiasm,” the official report of the 1896 Games read.

Spyros Louis made his last public appearance at the 1936 Summer Olympics in Berlin, carrying the Greek flag in the opening ceremonies and receiving an olive branch from the Olympic Games’ birthplace, Olympia, by Adolf Hitler.