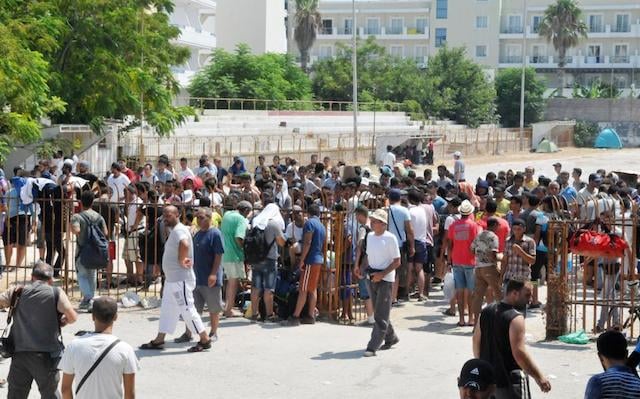 The number of refugees crowding the port of Mytilene on Lesvos Island, Greece has risen dramatically again, as food delivery has stopped at the first reception center in Moria with refugees moving to the port to secure a meal, according to local authorities on Tuesday.
The funding – totaling 2.2 million euros to date – given to companies which provided food to those living in Moria’s reception center has stopped and with no meals in sight, adult and children migrants and refugees are relocating to the port in search of food.
The problem is further exacerbated by the irregular operation of extra ferry services. With 2,500 to 4,000 people arriving daily at the northern and eastern coast of Lesvos, the daily ferries are not enough to transfer them to Piraeus and the extra ferries do not maintain regular services to decongest the island.
Police estimate that about 4,500 have camped at the port, in parks or are sleeping on pavement at the docks. Refugees and migrants are stuck in Mytilene, not being able until they can secure a ferry ticket and are granted the proper documents. Those who do buy a ticket, often only find one for a week later.
Adding to their problems, yesterday’s downpour sent hundreds of people to seek shelter in sheds, arcades, entrances to buildings and abandoned houses.
(source: ana-mpa)