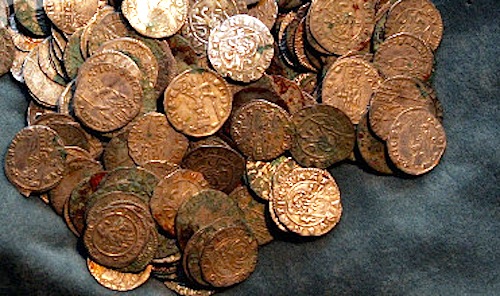 The ancient commercial roads that linked the city of Thessaloniki and Macedonia of the Roman era with the cities of the wider region of the Black Sea have been revealed by the coins found during the archaeological excavations at the under construction stations for the Thessaloniki metro.
A total of 672 coins were discovered during the excavations of the metro stations of Thessaloniki. 137 cannot be identified, 393 were issued in Thessaloniki, 47 in Rome, 13 in Antioch, 6 in Edessa of Syria, 6 in Syskia, 3 in Milan, 2 in Africa, 1 in Ravenna and 1 in Arles.
The other 57 came from the regions of Propontis and the Black Sea. The Human Science School of the International Hellenic University organizes the congress “International Congress for the Black Sea in the Antiquity” on September 18-20 during which the 57 copper coins that were issued in Propontis and the Black Sea will be presented for the first time.
Twenty-two of them are from Constantinople, 18 from Cyzicus, 5 from Nikomedia, 9 from Heraklia, 1 from Troad, 1 from Bythynia and 1 from Panticapaeum and are dated back to the 3 to 4 centuryy AD.
“These coins prove that a trade relation between Thessaloniki and other cities in the Propontis and the Black Sea had been developed in the Roman Era,” assistant professor of Classical Archaeology Manolis Manoledakis said to ANA-MPA. “We are aware, from a large number of Roman sarcophagus in Thessaloniki, that some of the persons buried in the city were born in Asia Minor and Propontis,” the University’s professors underlined, adding that “the excavations in the metro as well as the restoration of the coins continues and we expect to find more coins from Propontis and the Black Sea that will broaden our knowledge on the communication and interaction between these areas and the city of Thessaloniki.”
(source: ana-mpa)