Amphipolis Tomb Monument in Danger A Year After Unearthing 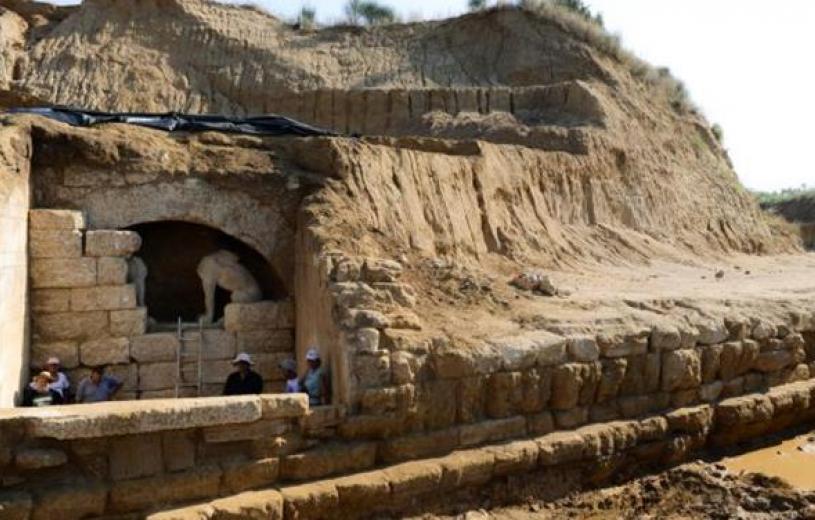 The first year anniversary of the Amphipolis tomb discovery finds the archaeological site in danger of being buried again in dirt, and oblivion.
It was a year ago when the discovery of the ancient tomb was heralded as one of the most important archaeological discoveries in history, as it was initially thought to be the burial ground of Alexander the Great.
The findings were unveiled on a daily basis and the world was watching the search unfolding with bated breath. But the grave did not belong to Alexander the Great. Later, some archaeologists claimed it could be the tomb of Alexander’s mother, Olympias. That could not be confirmed though.
The interest faded as the Culture Ministry said it would take three months to find out the identity of the skeletons discovered inside the grave. Further excavations stopped and the site was almost abandoned. Since the January elections very little has been done to protect the monument from natural elements.
In early September, the Central Archaeological Council will discuss ways to protect the ancient burial monument. The harsh winter has made the soil retreat, while landslides threaten to destroy parts of it and bury it again.
In May, Deputy Culture Minister Nikos Xydakis said in parliament that unless the Amphipolis tomb is immediately restored, it will be buried in the dirt, adding that urgent drainage works are needed.
However, not even the restoration studies have been approved yet. Lack of funding has left the Ministry with its hands tied. The Ministry says that 200,000 euros have been allocated for emergency works.
Shielding the slopes of Casta hill and keeping away rainwater are the two most urgent protective works needed. Also, the props of the tomb need to be secured and reinforced. It is important that these emergency measures are taken before winter, officials noted.

The Greek Orthodox Church is blessed with rich, colorful and symbolic Easter traditions that Greeks have followed for centuries.
Business

The Greek Parliament approved a new law which allows the transfer of the historic Parnitha casino to Maroussi, a northern suburb of Athens.