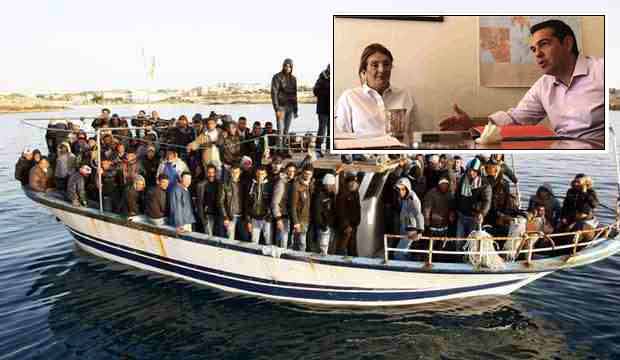 Officials of the Greek government, including prime minister Alexis Tsipras and various ministers, convened on Friday to discuss the refugee crisis the country is dealing with.
“Greece is in a crisis within a crisis,” Tsipras said upon his arrival to the meeting.
The prime minister also noted that he is in communication with Turkey over the 2,000,000 refugees that are in the neighboring country and urged Europe to coordinate with them as well.
The European Commission reported on Friday that 50,000 migrants and refugees entered Greece only in the month of July. During the whole year of 2014, 43,500 migrants and refugees entered the Greek borders.
Prior to this massive influx, the number of seaborne refugees and migrants to Greece had already reached unprecedented levels. The Office of the United Nations Commissioner for Refugees had reported that 68,000 people had entered Europe through Greece’s waters by the end of June, making the country the most common entry point for these refugees and migrants. That same UN report had also found that the 85 percent came from war-torn regions, especially Syria, which has fallen into a bloody civil war that has cost the lives of over 220,000 people since it began in the spring of 2011.
Following the meeting, Tsipras identified Western interventions in conflicts in the Arab world as the main reason for the massive migration to the west.
European Union migration spokeswoman Natasha Bertaud said on Friday that Greece has 260 million euros from the Asylum, Migration and Integration Fund (AMIF) and 166 million euros from the Internal Security Fund (ISF) for the 2014-2020 to face this influx. Bertaud noted that Greece will be able to use the first installment after the AMIF approves Greece’s plan. That could be as soon as next week.
Tsipras called for the utilization of these funds that Greece has secured from Europe to facilitate the refugees’ transition into Greek and European society.
“Greece is the border of Europe and its receiving huge influxes of refugees. It will be seen how much potential there is for a solidary Europe or whether everybody is concerned with their own borders,” the prime minister before the meeting.
He reiterated the necessity for collective action and solidarity within the European Union following the government meeting as well.
He also noted that the refugees who were staying in the Pedion tou Areos Park in central Athens have been removed to a safer space close by that offers humane living conditions.