August 480 BC: Leonidas' Brave 300 Fought the Battle of Thermopylae 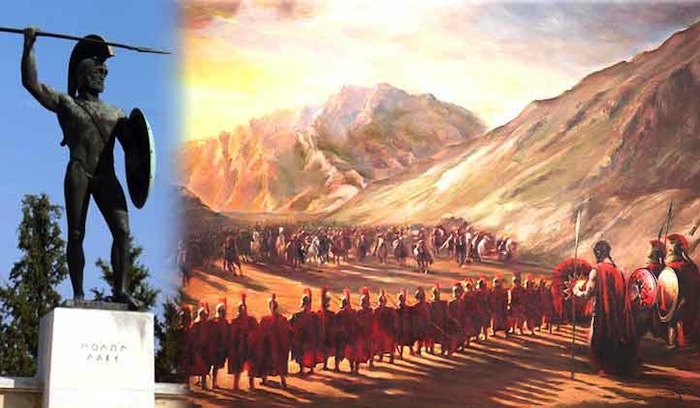 The battle of Thermopylae and the valiant fight of 300 intrepid Spartans under the guidance of warrior King Leonidas against 10,000 Persian elite soldiers is one of the greatest moments of Ancient Greece’s history and provided great tales of bravery and patriotism for generations to come.
Most historians argue that the famous battle took place on August, 480 BC. Thermopylae (hot gates in English) was a pass of great strategic importance for those travelling south from Thessaly into central Greece. This is where the 7,100 men of the allied Greek forces were waiting.
The quarter-million strong Persian imperial army of King Xerxes was advancing in central Greece with the aim to reach Athens and take over the city. Xerxes was certain that conquering Greece would be easy, given the sheer number of his army. Yet, they camped for five days at Anthela, near Thermopylae, because they had no idea how many soldiers (hoplites in Greek) were waiting on the other side of the pass. They were also waiting for the Persian fleet that had been damaged and delayed by bad weather off the coast of Magnesia.
When the Persian army attacked, the battle went entirely according to the plan of the Greeks at first. The narrowness of the pass at the middle gate negated the advantage of numbers for the imperial troops. Moreover, the Greek hoplites were better equipped, with long thrusting spears, heavy bronze and wood shields, and body armors. The Persians had shorter spears, wicker shields, and thick-woven linen corselets. For two days the Spartans held off lesser elements of the imperial army: Medes and Cissians were succeeded by the elite troops, the Immortals, to little avail.
But the tide turned when a local man, Ephialtes of Trachis, offered, in exchange of money and favors, to show the Persians a way around the back of the defending force, the Anopaia path, a way to get past the mountain and attack the Greeks from behind. Xerxes agreed, sending what was left of his 10,000 “Immortals” off at dusk.
According to Herodotus, Leonidas had been aware from the beginning of the existence of the Anopaia path. He had stationed 1,000 Phokians there to stop any encircling movement. However, the Phokians were taken by surprise and put up little resistance. But word got through to Leonidas that the position had been outflanked, and there seems to have been time to abandon the position and withdraw to the south before the Immortals arrived.
Yet, Leonidas refused to retreat. He let everyone else leave and kept his 300 Spartans to battle the Persians. There have been many interpretations of his decision to stay and fight until death. Herodotus represents it as an act of deliberate self-sacrifice carried out in accordance with an oracle, which had said that the death of a Spartan king would save Sparta from destruction. Other historians took the military approach and argued that Leonidas wanted to give the allied contingents time to get away.
Nevertheless, the Battle of Thermopylae and the heroism of Leonidas and his brave hoplites have written one of the most brilliant pages of Greece’s rich history.
As for Ephialtes, the greedy traitor, his name was used later in the modern Greek language to mean “nightmare.”