GRNews
GreekReporter.comGreek NewsEconomyGreek PM Tsipras Interview: "A Bad Deal Was My Only Option to...

Greek PM Tsipras Interview: "A Bad Deal Was My Only Option to Save Greece" 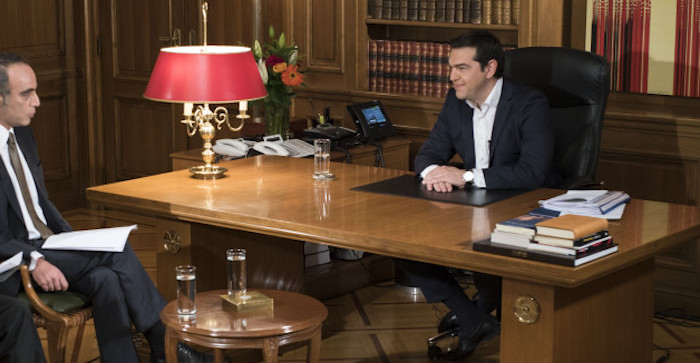 “It is a bad deal, but there is no better option” Greek Prime Minister Alexis Tsipras said, referring to the agreement he worked out with Greece’s creditors at a 17-hour long Euro Summit.
Greek Prime Minister Alexis Tsipras gave an extensive interview to the Hellenic Broadcasting Corporation on Tuesday evening, defending the deal he agreed to on Monday in Brussels while conceding its negative aspects and assuring the public that he has no intention to resign.
“I take on the responsibility of signing a document I don’t believe in,” he said about the agreement.
He admitted that the measures that are included in this deal will be hard for Greeks but noted that it is overall better than the one Greeks turned down in the July 5 referendum. The new program has a three year and not a five month duration, while it also guarantees a very substantial sum of money, according to Tsipras.


The Greek prime minister appeared shocked by the behaviour of his European counterparts during the negotiations and admitted that while he fought to the last breath, he was not able to get everything he wanted.
“The result of the Euro Summit and the Eurogroup was the result of a strong pressure on a country, which had democratically expressed itself, to satisfy the more financially powerful countries in Europe. That is the truth,” he said.
The Greek premier said negotiations in Brussels were very tough but also recognised the support of France, Cyprus, Austria and Italy who was Greece’s most passionate defender.
Ultimately Tsipras believes this deal, if it is finalised, will help Greece leave the crisis behind and reenter a path of growth. According to Tsipras the three main benefits of this deal are that it will cover Greece’s short term needs, including the recapitalization of banks, it will give 35 billion euros for investment and it includes a commitment for debt restructuring in the future.
Tsipras also claims he was first informed about the German Finance Minister Wolfgang Scheauble’s plan for a temporary Grexit in March or April. However, during a follow up conversation on the matter with German Chancellor Angela Merkel he was assured there was no such intention.
Greece’s premier spoke for over an hour to ERT’s reporters and said that when he met with prominent foreign leaders from the United States, Russia and China none of them told him to leave the Euro, or offer financial assistance to Greece.
“I never had a plan B” the Greek prime minister said and added that adopting the Drachma would have devastating effects on Greece and particularly the poor.
Although Greek banks will remain closed until Monday according to Economy Minister George Stathakis, Tsipras expressed his confidence that they will reopen once liquidity to Greece is resumed form the European Central Bank. The Eurogroup has been working on possible solutions to greenlight an increase of ELA to Greece.
Tsipras noted that it is not in his party’s and his own culture to remove dissidents from the party, but argued that everybody will be judged by their actions. The Greek prime minister and SYIRZA leader is facing a serious rift within his SYRIZA party with many lawmakers saying that they will vote against legislation for the bailout deal.
“The safety of ideological pureness is not compatible with moments of crisis,” he said.
The prime minister declared that he would not join a coalition government with To Potami and New Democracy, which have expressed support for the deal. He also noted that there is no need for general elections as long as he has the support the Greek parliament members.
He further discussed Greece former finance minister, Yanis Varoufakis, whom he called an excellent economist and a great person.
“There is no doubt he made mistakes,” said the Greek PM about Varoufakis and revealed that the two men are still good friends and talk often on the phone.
“If someone is a great economist and a great person, that does not mean that they are a good politician” the prime minister further commented.
On the other hand Tsipras praised his coalition partner and Independent Greeks (ANEL) leader Panos Kammenos for his support. Tsipras said that while they come from completely ideological and political backgrounds, they have built a very close relationship Kammenos has always stood by the prime minister’s effort.
“He has his own parliamentary group, he will make the decisions he needs to make,” the prime minister said.
Kammenos has voiced his dissatisfaction with the deal but also said he will support the prime minister’s efforts.
Tsipras’s next battle will come when the deal will have to pass through the Greek Parliament.