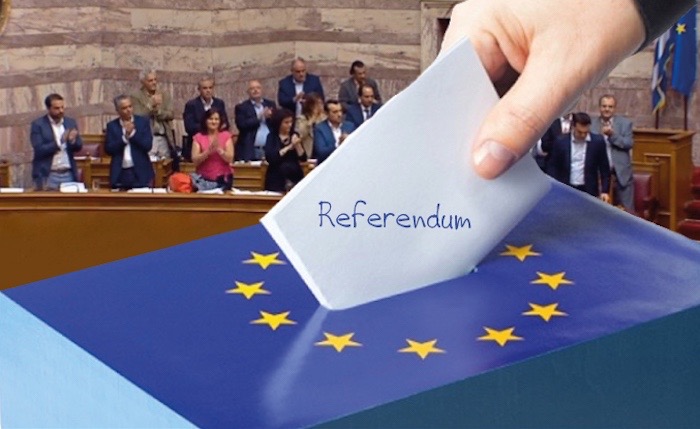 The Greek Parliament approved the Greek government’s proposal for a referendum to be held in Greece on July 5, asking citizens to vote YES/NO on the agreement the country’s creditors offered in order to release a much-needed financial aid for Greece.
The parliament convened on Saturday, June 27, and in a dramatic session that continued until the first hours of Sunday finally approved the government’s proposition to hold a referendum with 178 votes.
At some point Prime Minister Antonis Samaras and his New Democracy MPs left the room because they said that Greek parliament speaker Zoe Konstantopoulou disrespected the parliament’s rules. They later returned after a 10 minute break requested by Greek Prime Minister Alexis Tsipras.
Samaras said that the referendum does not do Greece any good and it only serves Alexis Tsipras and his government that do not want to admit that they failed to negotiate a viable agreement with the creditors.
According to the referendum, voters will be asked to respond to the following question:
“Greek people are hereby asked to decide whether they accept a draft agreement document submitted by the European Commission, the European Central Bank and the International Monetary Fund, at the Eurogroup meeting held on June 25.”
Those citizens who reject the institutions’ proposal will vote, “Not Approved / NO”, while those citizens who accept the institutions’ proposal will vote, “Approved / YES”, according to the cabinet proposal.
Tsipras urges Greeks to say NO to creditors
Although PM Tsipras announced his government’s intention to hold a referendum, in order for it to actually happen it needed to be approved by the Greek parliament as a question of “crucial national matter.”
Addressing the Greek parliament, Greek PM Alexis Tsipras said that creditors did not offer a viable solution to Greece while they resorted to blackmail.
“In the country that gave birth to Democracy we won’t ask permission from Mr. Dijsselbloem and Mr. Schäuble in order to to ask the opinion of the Greek people,” said Tsipras referring to statement’s by Eurogroup President Jeroen Dijsselbloem who said that the referendum is a mistake for Greece.
“The Greek referendum will take place on July 5, no matter what the Eurogroup or others want,” he noted.
The Greek Prime Minister urged the Greek citizens to vote NO on the referendum, a result that he said will be “an answer to Europe’s bad practices and the financial elite that governs the union today.”
A ‘No’ in the referendum “will be a Yes for the actual values Europe was based upon: democracy, dignity, equitability and the people’s right to vote for their future,” said Tsipras.
“Our decesion is not a decision of ruputre with Europe, it’s a decision of rupture with those who don’ t believe in our European ideals. It’s a decision of dignity to those who have been blackmailing us.”
Tsipras noted that the referendum is not his government’s intention to question Greece’s stay in EU and the Eurozone, but a question to approve, or not,  “a humiliating agreement the creditors offered Greece.”
The Greek PM said: “Nobody can tell us to leave from our common home, the European Union. Nobody has the right to do this.”
The day after the referendum:
“The next day of a proud ‘No’ will be a day that will find Greece stronger in the negotiations table and the creditors will understand the truth: that Greece is not a game but a country and equal EU partner,” said the Greek Prime Minister.
“Our intention for a fair compromise by both parties will remain the same, in the negotiations table,” Tsipras concluded.

Tourism Workers To Be Vaccinated As Greece Opens Up