Greek Govt Backs Down on Red Lines to Secure Deal 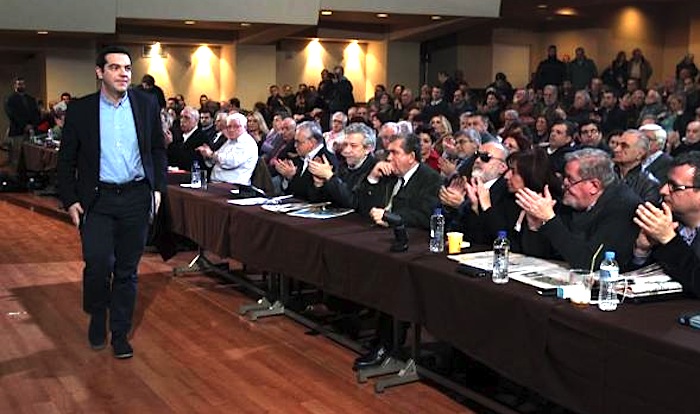 The Greek government has been forced to back down on several of its pre-election campaign pledges as negotiations continue at a slow pace while state coffers are emptying at an alarming rate.
The so-called “Thessaloniki program” that Prime Minister Alexis Tsipras had announced in September 2014 and boosted his popularity is now subject to negotiation with creditors while many items have been abandoned altogether. In other words, the “red lines” the government has set in negotiations are already partially crossed.
The impasse in deliberations over the reforms that need to be implemented in order to secure further financial aid for Greece has forced Tsipras to push back several of his pledges. Government spokesperson Gavriil Sakellaridis indirectly admitted that several of the items of the Thessaloniki program cannot be implemented saying that they will be pushed back to a four-year timeframe.
More specifically, the pledge for a 751-euro minimum wage has been pushed back for 2016. Accordingly, this means that the unemployment benefits raise also promised is pushed back as well. The abolition of the single property tax (ENFIA) will remain, for 2015 at least. The bill will apply, albeit with a different name. The bonus Christmas pension (the so-called 13th pension) also goes to the back burner.
The pledge that incomes up to 12,000 euros will not be taxed is also “forgotten.” The 2-billion-euro program to battle the “humanitarian crisis” has been reduced to a bill reinforcing these actions by 200-300 million euros. The plan to form a program that would fund 300,000 job positions was also a promise that would never be kept. The pledge to stop privatizations does not seem to materialize either as the government is already negotiating partial sale of the Piraeus Port.
Finally, and most importantly, the pledge to get a generous debt haircut from creditors was forgotten as early as February 20, when the bailout extension was signed.
According to analysts, the mistake Tsipras made when he announced the Thessaloniki program was that he was counting on the 11 billion euros available in the Hellenic Financial Stability Fund (HFSF). At the time, Tsipras believed that he could use these funds in order to implement his social program. However, the purpose of HFSF is to secure the country’s banking system and its funds cannot be used for other purposes. Thereby, after the SYRIZA government signed the February 20 deal with creditors, the 11 billion euros of the HFSF were transferred to a Luxemburg account after a Eurogroup decision.
Also, according to analysts, the Greek PM was counting on sizeable revenues from tax evaders. However, the new government lacks the expertise and ability to create tax collection mechanisms. Thereby the revenues expected were not as high as expected.