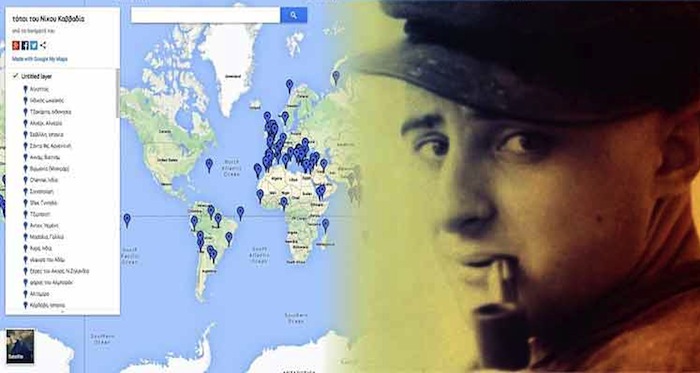 A google map user gleefully blurred the lines between reality and fiction presenting a new map that gives web users around the world the opportunity to roam free on the exotic ports and sea tales that are mentioned in the books of the Greek sailor-poet Nikos Kavvadias.
By using a new application of Google maps you can now turn into a true adventurer visiting the approximately one hundred places that are described in his poems. Because an unknown devotee of Nikos Kavvadias pinned all the world map areas that are referred to in his poems. By clicking on the pins, not only can you visit these areas but you can also read Kavvadias” verses linked to each region.
The Greek poet and writer, who used his adventures around the world as a sailor as strong metaphors for an unconventional getaway from reality, was born on January 11, 1910 in the small town of Ussuriysky in Russia. He was the second child of Charilaos and Dorothea Kavvadias, whose origins can be found on the Greek island of Cephalonia. He left his last breath on February 10, 1975, inside a clinic in Athens, on land and not at sea that he so much craved in his life.
You can find the map below: