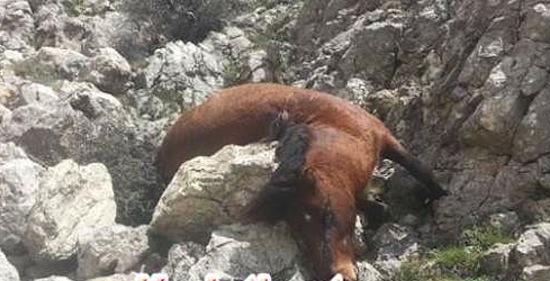 Greek police in Corinthia, Greece discovered 26 wild horses that were shot dead after receiving a phone call from concerned vacationers who spotted the animals lying on the rugged slopes of the 2,376-meter Mount Cyllene.
The preliminary police investigations revealed that the horses which were found dead on Thursday, April 30 were killed by gunfire. In fact three of the horses were found alive but unfortunately they died as well.
The horses belonged to a 73-year-old man from Nemea, Peloponnese who spends his summers in the area of Goura in Corinthia. The man’s daughter filed an official complaint to Greek police, while a veterinarian visited the site in order to determine whether all the horses had died due to gunfire. The vet determined that the animals were shot earlier in the week since he found evidence of advanced sepsis, while the police officers conducting the investigation found several shotgun shells.
This is the second time that the 73-year-old Greek has faced a similar situation. His granddaughter, Paraskevi Bekiari revealed that her grandfather was the only person who owned horses in the area and that they did not want to believe the rumors that a shepherd had killed the horses because as she stressed “someone who loves animals could never commit such an act.” She also noted that her grandfather, who loved horses, had paid a lot of money for any agricultural damages that they may have caused without ever receiving any subsidies.
Furthermore, she stressed that this was the second time that her grandfather’s horses were killed. Two years ago someone shot his herd which consisted of twelve animals at the time. Finally, she expressed her hope that police would find the perpetrator.