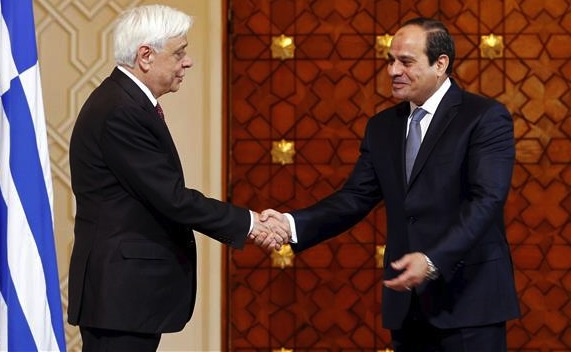 The way Egypt is dealing with delineating the Greek-Cyprus-Egypt Exclusive Economic Zone “is exemplary,” President of the Hellenic Republic Prokopis Pavlopoulos said on Thursday, after a meeting with Egyptian President Abdel Fattah el-Sisi in Cairo, unlike the way other countries do that creates problems (implying Turkey).
On illegal immigration, Pavlopoulos said that the EU should make funding available to non-EU Mediterranean countries like Egypt, and on terrorism he said that it could be dealt with by the application of international law at international fora and the EU, and through a cohesive policy relating to foreign policy and security. “The dealing of very large provocations in the Middle East and East Mediterranean presupposes Egypt’s playing a leading role in the Arab and Muslim world,” he added.
The Egyptian president said both countries should be assisted financially, as there are today 5 million undocumented migrants which Egypt “treats in the same way it treats Egyptian citizens.” He also underlined the need of the legal government and army being supported in Libya and a solution to Syria’s issue that would guarantee the country’s sovereignty.
Both agreed to strengthening Greek-Egyptian relations, while Pavlopoulos also thanked the president and the government of Egypt “for the goodwill shown to Greeks and the Greek Orthodox Church, which has a tradition of eons in this blessed land.”
On Friday, Pavlopoulos will attend the inauguration ceremony of the chapel of the St. George Monastery of Old Cairo, organized by the Greek Orthodox Patriarchate of Alexandria.
(source: ana-mpa)