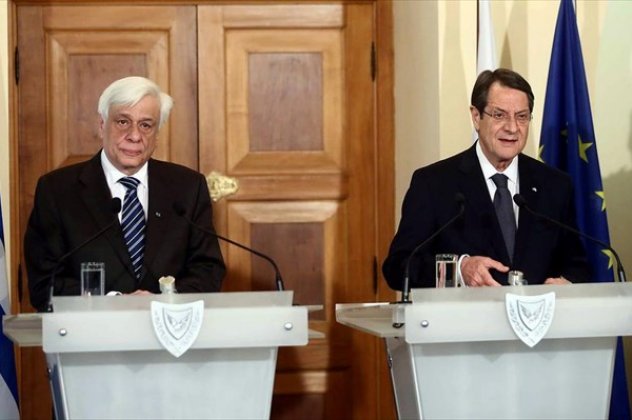 The President of the Republic of Cyprus, Nicos Anastasiades, is scheduled to travel to Athens on Friday, April 17, in order to brief the country’s political leadership ahead of the scheduled resumption of the United Nations-Backed bicommunal talks “in one of the most decisive phases of the Cyprus problem,” a diplomatic source told Cyprus News Agency (CNA).

According to other sources, the Cypriot President is expected to explain to his newly elected Greek counterpart Prokopis Pavlopoulos, Greek Prime Minister Alexis Tsipras and leaders of parliamentary represented parties -except the Nazi-inspired Golden Dawn- that he is willing to return to the negotiation table with the Turkish-Cypriot side under the condition that Turkey will commit itself not to proceed to any further “offensive actions” and that there will not be any “other terms” and the talks will resume from “where they were stopped” before the interruption due to Turkish provocations.

Earlier this month, government spokesman Nicos Christodoulides said that UN special envoy for Cyprus Espen Barth Eide had conveyed to President Anastasiades a message from Ankara that, following the withdrawal of Turkish seismic vessel “Barbaros” from Cyprus’ Exclusive Economic Zone (EEZ), Turkey will not renew its nautical advisory for further natural gas exploration. “In view of these facts, and taking into consideration our strong desire for a solution to the Cyprus problem at the earliest possible, our side is ready to withdraw its decision for the suspension of its participation in the negotiating process,” Christodoulides said.

During his visit to the Greek capital, the Cypriot President is also scheduled to explain to Greek political leaders why he estimates that under the above conditions “this is the appropriate moment to enter a substantial phase toward the solution of the Cyprus problem,” taking also into account the results of the upcoming illegal elections in the island’s northern Turkish-occupied areas on Sunday.

Moreover, as other diplomatic sources said, Anastasiades will also analyze the stance of the so-called “international players” on the Cyprus problem, namely the UN, the US, Britain and the European Union. “In this phase, the President will naturally want to gain maximum support and consensus, from wherever this may come,” a senior Greek diplomatic source told CNA.