Holy Wednesday; What Do We Celebrate? 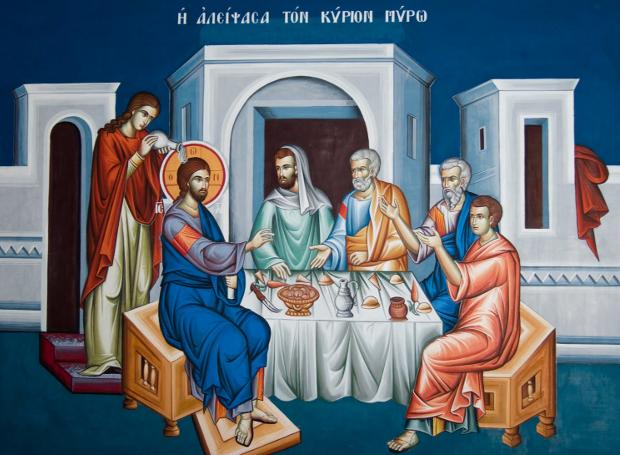 We are in the middle of the Holy Week. The Greek Orthodox Church reminds us of a fact that took place two days before Jesus Christ was crucified.
According to Matthew, Jesus was at the house of Simon the leper. As they sat at the supper table, a woman named Mary asked for Jesus’ forgiveness because she was a prostitute and anointed Jesus’ head and feet with costly spikenard oil. The disciples were indignant, asking why the oil was not instead sold and the money given to the poor.
Taking the woman’s side, Jesus Christ told his disciples that she had prepared him for burial. The poor could be helped every day, however he would only be there for a small period of time. He forgave her for her sins and, speaking prophetically, he said that her actions would be referenced in the Gospel. Then Judas went to the Sanhedrin and offered to deliver Jesus to them in exchange for money. From this moment on, Judas was looking for an opportunity to betray Jesus.
In Greece, all members of the church receive Holy Unction on the evening of Holy Wednesday. The anointing oil used during the service is considered therapeutic.
In some areas, women take a large bowl of flour to the Holy Unction and place three candles in it that burn during the ceremony. The next day, the flour is used to make Easter sweets.