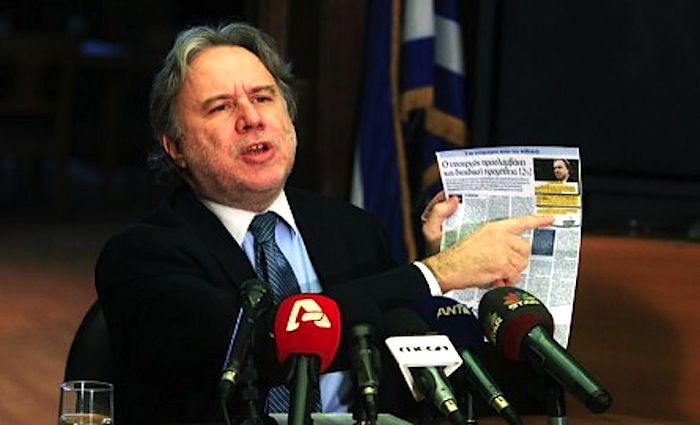 Greek Deputy Minister of Interior and Administrative Reconstruction Giorgos Katrougalos denied allegations that he had signed dozens of private contracts for reinstating laid off public sector employees through his law office in exchange of 12% of their salary.
According to a report in Greek newspaper “To Vima,” Katrougalos had signed several contracts representing laid off public workers stating that in case of rehiring, he would receive 12% of their salaries. Some of these contracts were submitted to the Bar on January 27, 2015, when Katrougalos was sworn in as Deputy Minister.
The report claimed that the case raises serious political and ethical issues as in the first official statement Katrougalos made as a Deputy Minister, he pledged that all public sector employees who were laid off by the previous government would be reinstated.
In response to the article, the Greek Deputy Minister gave a press conference denying all allegations and called the report “unsubstantiated, false, yellow and libellous.” He said that he left the law office in June 2014, after he was elected for the European Parliament, that he established his own law office in July 2014 and that he stopped practicing law when he was sworn in on January 27, 2015.
Katrougalos said that the new government will pass a bill reinstating laid off public workers. In that case, he will not have any right to claim a fee, so the accusations are groundless. He also said that if even a part of all these allegations is true, he will resign from office immediately and leave the country.
The Greek government issued an official statement saying that the report contains four lies and one truth. First, Katrougalos was not elected in parliament in January. He was an MEP since May 2014 and was appointed Minister on January 2015. Second, how is it possible that the people who signed the contracts knew that he would be appointed in the Administrative Reconstruction Ministry and rushed to submit the contracts to the Bar on January 26 and 27? Third, the Deputy Minister had not signed such contracts as an MEP. Before the European Parliament elections, he had indeed signed contracts with about 20 laid off school guards asking one half of one month’s salary as a fee. The total fee from all 20 would be less than one month’s salary as an MEP. Also, if the school guards were rehired by law, then there wouldn’t be any fee. Fourth, the document presented by the newspaper –a photocopy of the contract– referred to just one case of a worker of the Salamis Naval Base who had a salary dispute with the employer, and had nothing to do with laid off public workers.
The one truth, according to the official statement, is that after Katrougalos was appointed, he called an open meeting with all laid off public employees to announce that they will be reinstated and no private meetings will be held. For reasons of transparency, the meeting was done with the presence of the Press.