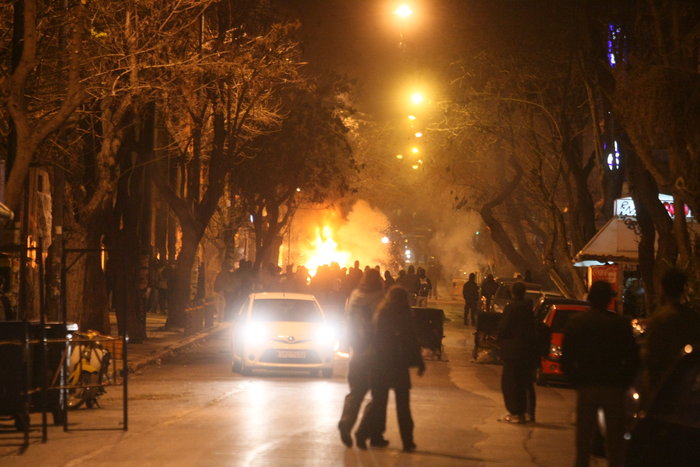 The Exarcheia area in downtown Athens was once again the field of riots as hooded men burned cars, smashed shop windows and vandalized bus stops.
The riots started at night after about 1,000 anarchists marched from Monastiraki to Syntagma Square demanding the closing down of maximum security prisons and the release of terrorists, whom they consider to be political prisoners.
The rally split into two parts at Syntagma Square, with one group going to Omonoia Square while the biggest part moved to Exarcheia Square. There, they set trash containers on fire in the surrounding streets. They also burned a few cars that were parked on Charilaou Trikoupi street and smashed the entrance of PASOK headquarters located there.
Vandalism and burnings also took place around the Athens Law School which is occupied for the fifth day by a group of anarchists also demanding the release of terrorists and the closing down of maximum security prisons.
Then a group of young men with their faces covered moved to Stournari street where the old building of the National Technical University of Athens is located. Around the building there is a scaffold put in order to remove graffiti that defaces the historical building. Rioters tore down the scaffold and set fire on cars that were parked on the street.
Later, at the junction of Patision and Tositsa streets, they stopped a bus and after forcing passengers and the driver to get out, they proceeded in destroying the vehicle with clubs and stones.
There were no arrests made and no injuries reported.