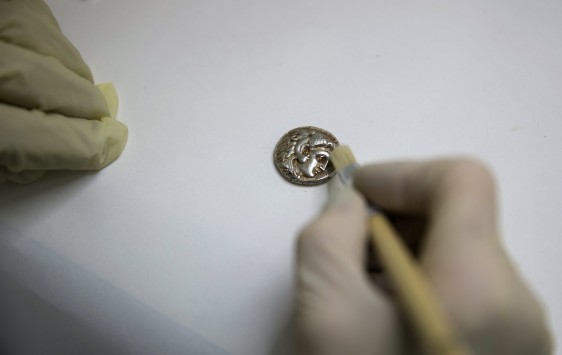 Cave explorers in Israel have discovered a small treasure of coins and jewelry dating to the era of Alexander the Great. According to archaeologists the treasure had been hidden by people displaced due to a war.

The 2,300-year-old treasure is the first of its kind to be found in Israel, according to the Israeli Antiquities Authority. Just one month ago, a team of trained divers found an even greater treasure, consisting of 2,000 gold coins dating back to the 11th century.

The exact location of the cave has been kept a secret for the protection of the archaeological find and also to keep people away from the dangerous cave in the region of Galilee. The explorers found two silver coins in a narrow crack while spelunking in the area, while also discovering various silver jewelry such as rings, bracelets and earrings.

“The valuables might have been hidden in the cave by local residents who fled there during the period of governmental unrest stemming from the death of Alexander, a time when the Wars of the Diadochi broke out in Israel between Alexander’s heirs following his death,” noted Israeli Antiquities Authority officials in an official statement. “Presumably, the cache was hidden in the hope of better days, but today we know that whoever buried the treasure never returned to collect it.”

After the explorer reported their discovery to IAA, archaeologists descended into the cave for further investigation. They found more objects, including pottery, dating back to the Chalcolithic period 6,000 years ago, the Early Bronze Age about 5,000 years ago and the Biblical period about 3,000 years ago.