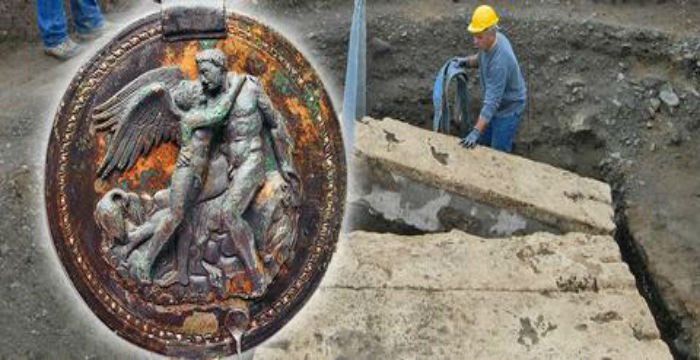 Clay figurines and other important findings were unearthed by archaeologists in the Tsakiridis section in the center of the ancient Greek city Aegae in Vergina, northern Greece. The artifacts were presented as part of the Archaeological Conference on the 2014 excavations in Macedonia and Thrace, which takes place at Aristotle University of Thessaloniki.
According to the archaeological team statement, excavations in the Tsakiridis sector begun in 2005-2006 and since then they take place in small time periods, with little financial means. “During the short excavation periods we have come across several interesting findings from the city’s late Hellenistic and Roman era,” noted the archaeologists.
Twenty-one graves were found in the necropolis of Aegae, six of which had not been looted. One of the most impressive findings in the necropolis was a beautiful mirror, which was found in the tomb of a young girl (4th century BC). Her parents had buried her along with gold ornaments, earrings and beads, and a small, bronze masterpiece, a mirror with Eros and Dionysus carved on the lid. Eros (Cupid) is depicted as a young child that flies to embrace the ancient Greek god of lust and passion (Dionysus).
The richest tomb in the necropolis which had unfortunately been looted contained fragments from a funerary bed which was decorated with clay carved plaques, depicting the ancient Greek goddess Athena watching a battle between Greeks and barbarians.