GRNews
GreekReporter.comGreek NewsEconomyGreek PM Tsipras to Cabinet Meeting: The Memoranda Are Over

Greek PM Tsipras to Cabinet Meeting: The Memoranda Are Over 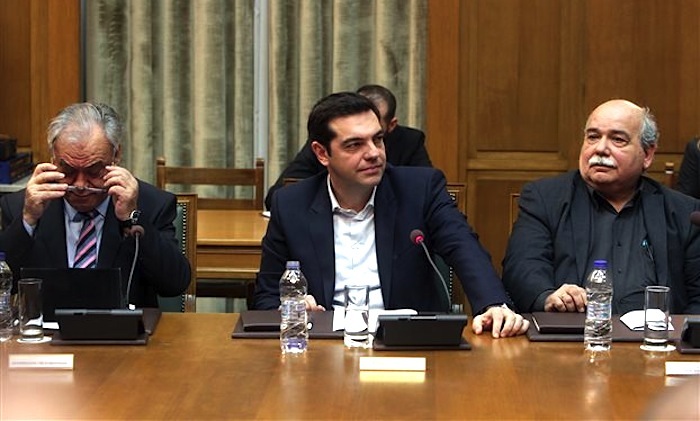 The cabinet meeting chaired by Greek Prime Minister Alexis Tsipras convened earlier today, focusing on the preparation of the new government’s work as well as on the first bills to be submitted to the Greek Parliament by next week. The first bills, as the Greek Premier explained, are aiming to address the humanitarian crisis.
The cabinet meeting comes only a few hours after an emergency meeting of the government’s economic team with the participation of Tsipras, centered on the funding gap and covering the fiscal needs. The meeting was also attended by government Vice President Giannis Dragasakis, Finance Minister Yanis Varoufakis, Economy Minister Giorgos Stathakis, Productive Reconstruction Minister Panagiotis Lafazanis, Deputy Finance Minister Nadia Valavani and Alternate Minister of International Economic Relations Euclid Tsakalotos.
The Eurogroup agreement on the Greek list of reforms closed a first round of hard and persistent negotiations, the Prime Minister stressed in his speech, adding that the country achieved its preliminary targets set at this stage. “The Memoranda are finished, formally and substantially,” he continued, underlining that the European loan partners have finally withdrew their perseverance on impossible surpluses and confirmed the need to open new negotiations on the debt and its repayment.
“Some have bet on a third bailout, on the possibility of a third bailout in June. I am very sorry but, once again, we will disappoint them. They should forget the third bailout. The Greek people put an end to bailouts with their vote,” he characteristically underlined.
The government’s first bills to be submitted to the Greek Parliament
In his speech, Tsipras said that starting from the coming week, the government will take concrete legislative initiatives, with the first bill dealing with measures to address the humanitarian crisis. The bill will include targeted arrangements for providing free electricity and food to 300,000 Greek households currently in need. In the same bill will also be contained a setting for the start of the housing program for 30,000 beneficiaries, with grants per person, and forecasts to reduce evictions that were propagated in the five years of the Memorandum. Similarly, the bill will include debt adjustments for debts to social security organizations. Furthermore, the same bill entails the arrangements in force prior to December 31, 2013, for Financial Crime Unit (SDOE) reports, so as not to simply form informative reports to the Revenue Services.
Moreover, the government will table a legislation implementing the commitment of the primary residences’ protection by next week. This setting will be of an emergency character and will concern dwellings whose objective value does not exceed 300,000 euros. Finally, the Prime Minister also said that on Thursday, March 5, a draft legislation foreseeing the reinstatement of former state broadcaster ERT, which was abruptly shut down in June 2013 by the previous government, will be submitted to the Greek Parliament.