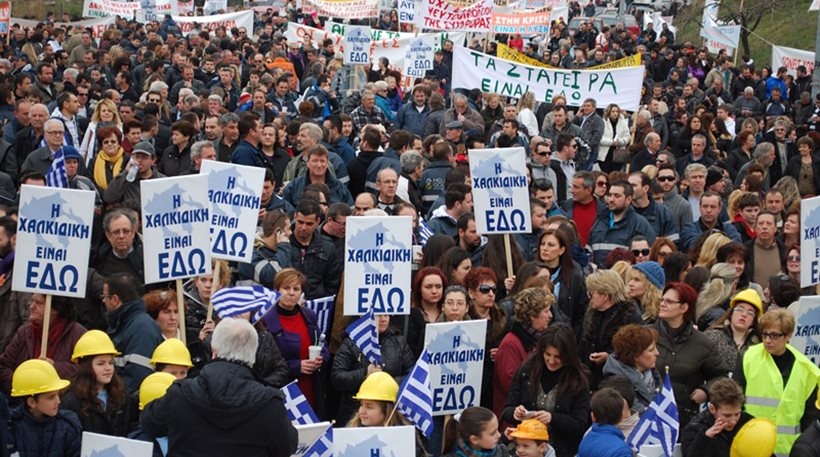 The 1,900 miners who work in the goldmines of Hellas Gold in Skouries in Chalkidiki, northern Greece, want to continue their work, despite the new government’s pre-election promises to shut down the mines.
According to Greek newspaper “Kathimerini,” the Skouries goldmines will be a crash test for the new leftist government. Prime Minister Alexis Tsipras had promised during his campaign that the mines in Skouries will shut down if SYRIZA becomes government.
Now, mine workers organize a series of protest rallies starting this Sunday in the village of Panagia. Some even said that they will stay inside the galleries if anyone tries to pull them out.
On the flip side, people of the wider Ierissos area who protest against mining in Skouries are organizing a counter-demonstration rally on February 15. They will ask from the new government to fulfill the promise to shut down the mines.
The government has not taken a clear stance on the matter yet, according to the Kathimerini report. In an effort to satisfy both sides, government officials have issued ambiguous statements that are unsatisfactory to both sides so far.
Minister of Productive Reconstruction, Environment and Energy Panagiotis Lafazanis told Reuters that the new government opposes Hellas Gold, noting that “we will consider our next steps in this regard” and avoided making clear what the intentions of Athens are.
Deputy Environment Minister Yiannis Tsironis was equally ambiguous to “Macedonia” newspaper when he stated that “we will not turn the switch off, but we will not change our stance now that we are government.” And he added, “We will take a look at the total investment, we will see what guarantees they give for the environment and growth,” acknowledging that “we have signed contracts, we must consider what it means to review them. We may consider other alternatives such as underground mining only. It is something we will examine from scratch.”
Miners’ representative Christos Zafeiroudas told Kathimerini, “We are determined to defend our jobs. We do not assign the right for the protection of the environment to anyone else since it is us who live in this environment and we make sure that the company maintains all legal requirements. If anyone tries to put obstacles in our cause, we will even stay inside the galleries, like we did in 2003,” he said.
Hundreds of protesters who oppose mining in the area traveled to Athens by bus in order to attend the debate of their actions against Hellas Gold at the Council of State. “There is a wind of optimism as we expect the government’s next moves. SYRIZA has promised too much, the company is evading taxes and the investment is illegal. In the next days, we will go to Skouries in masses and stop the mining company,” said Mining Activities Observatory President in Chalkidiki Tolis Papageorgiou.
“We go on with business as usual. We have all the legal permits, we are absolutely legal, we have invested 350 million euros. And we will invest as much in Olympiada and Skouries. In a short time we will hire another 700 people and the total number of jobs will amount to 2,500,” Hellas Gold spokesman Costas Georgantzis told Kathimerini.