Greek and German Finance Ministers 'Couldn't Even Agree to Disagree' 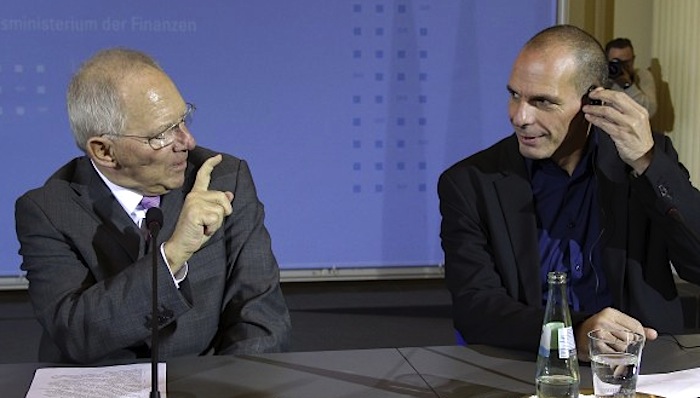 Greece must negotiate with the troika of international lenders on the basis of the bailout program, said German Finance Minister Wolfgang Schaeuble, after the meeting with his Greek counterpart Yanis Varoufakis in Berlin today. The two officials did not come to an agreement.
Talking to the Press, the German finance minister said, “We both agreed that we will remain committed to a united Europe. There is a simple way for Europe. There are many problems. Greece has the most difficult path,” Mr. Schaeuble said.
“We must show our respect for the progress made by Greece lately. There are different opinions about the reasons it arrived in this situation. But there are many things to be done in Greece. There has been no significant progress regarding the implementation of the program. With regard to unemployment, it will be reduced this year. Greece had a primary surplus. Greece is in the euro area although we agreed that there are disagreements. We had an open discussion,” the German finance minister said.
Mr. Schaeuble stressed that Mr. Varoufakis said that the debt is a problem of the whole of Europe and all countries should look for common solutions.
However, the German official said that Greece needs to negotiate with the three institutions participating in the rescue program.
“For us there’s not an issue of a German Europe. Instead we all have to adapt to a constantly changing Europe,” he noted.
Mr. Schaeuble stressed that Greece needs to strengthen competitiveness and to promote reforms. He said that Germany is willing to help Greece in any way to create an effective tax collection mechanism. The proposal to send German experts to Greece had not been accepted in the past.
“We have a common currency but different economic policies. There are commitments to the level of governments for their budgets and they need confirmation by the Greek Parliament, but it is important that agreed commitments and agreements must be respected,” he said.
The German finance minister said that in order for the current rescue program to change, Greece must find a way to access international markets. The subject of a debt haircut is not on the agenda. Right now it is important that Greece has access to markets.
European Union countries should know that Germany is trying for the best. There is a shared responsibility of Europeans to maintain a united Europe in the future and be able to convince future generations in the European venture, Mr. Schaeuble concluded.
The Greek finance minister’s statement
“We didn’t come to an agreement. We couldn’t even agree to disagree. We agreed to continue consultations as partners. Our solution will have Europe’s interest as a priority. We didn’t discuss the debt, but we set the framework for discussions,” Greek Finance Minister Yanis Varoufakis said.
“It is very important to put an end to the Greek crisis. It is important to put an end to this devaluation of the country and I am sure that Germany shares that,” he said. “As part of my visit I had unity in mind.”
On the issue of reforms, Mr. Varoufakis said the new Greek government will stop at nothing to end corruption and waste of state funds.
The Greek finance minister said that Greece wants from its partners to allow a transition period in order to introduce the Greek proposals to the EU, the ECB and the IMF.
Europe is at a crossroads. We must respect agreements made, without smashing democracy with a hammer,” Mr. Varoufakis said.