GRNews
GreekReporter.comGreek NewsEconomyGreek FinMin to Eurogroup President: We Won't Cooperate with the Troika

Greek FinMin to Eurogroup President: We Won't Cooperate with the Troika [Update] 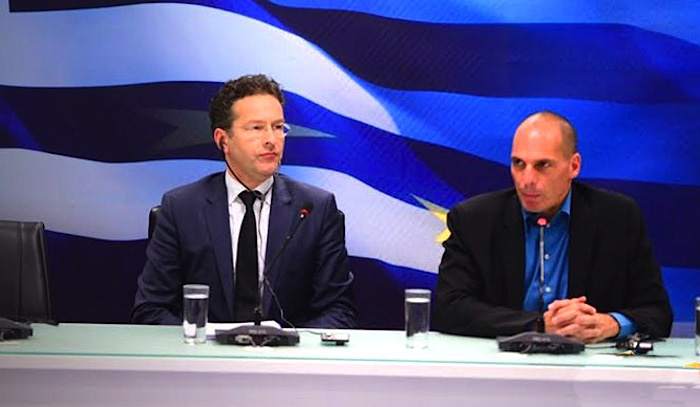 The President of Eurogroup, Jeroen Dijsselbloem and the Greek Finance Minister, Giannis Varoufakis, proceeded to joint statements, after their meeting just moments ago. Mr. Varoufakis welcomed the European Official “with great joy,” declaring that this was only an introductory meeting. “We started a first meeting process which will be the basis for a fruitful and effective cooperation, as required in the interests of Greece, the Eurozone and the European Union,” he added.

The starter pleasantries, however, were soon to be replaced by differing views in what is seen as the first clash of the newly elected SYRIZA-led government with the European partners.

The discussion ended on a good note with the President of the Eurogroup stating: “We discussed the procedures of the Eurozone putting particular emphasis on confidence that will lead to a new agreement within the Eurozone. From my side, I referred extensively to the Greek government’s priorities and the determination with which we intend to proceed with necessary, deep reforms, which must be made without fear and passion and restore the country’s competitiveness,” Mr. Dijsselbloem stressed.

The new Greek Finance Minister explained during the meeting that “the government’s guarantees for a balanced budget with a small primary surplus in perpetuity. I clarified that the State might have a continuity but we will not accept the self-reinforcing crisis of deflation and debt.”

Moreover, Mr. Dijsselbloem characterized the meeting as one of twofold purpose as it was made both “to hear the new government’s intentions and to explain the requirements of our agreements. We share mutual interests and both sides want Greece to regain its financial independence.” Referring to the 2012 Eurogroup, its President underlined that “it undertook a commitment to adequately support Greece in order to regain access to the markets under the condition it will meet its own commitments. Unilateral steps are not a way of moving forward. There are still problems in Greece, the situation did not change overnight.” At the same time, he expressed his understanding that the Greek people suffered harsh measures and “it is important for the new government not to waste this progress. “We expect from the Greek government to define its position and move forward together,” he concluded.

A few moments earlier, though, Mr. Varoufakis said that the government dismisses the troika’s logic: “Our first act as a government will not be the continuation of the program. In a cooperative spirit we want to convince our partners that the public interest will be served more efficiently with a new agreement,” he said. This caused a reaction from the Eurogroup President, who highlighted that the Greek program extension is due the end of February “and we have not yet concluded if there will be an additional extension,” while regarding the possibility of a conference on the debt he clarified that there is one already; the Eurogroup. 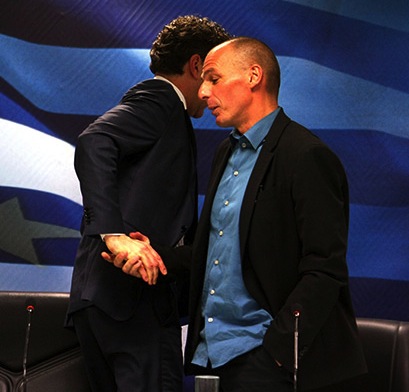 “You just killed the Troika” were, according to Greek media, Dijsselbloem’s departing words to Varoufakis after the latter said Athens will cease negotiations with the team of IMF/EC/ECB inspectors known collectively by that name.
“Wow” was the one-word response of the flamboyant new Greek Minister, or so his aides told reporters hours afterwards. Television newscasts made the disclosure after a mini media frenzy to learn exactly what was said by the two men after they stood up to leave in the process of exchanging an awkward handshake.

The meeting between Varoufakis and Dijsselbloem was preceded by the Eurogroup President’s visit to the government headquarters, Maximos Mansion, where he had a brief tet-a-tet with Prime Minister Alexis Tsipras.

Tsipras made it clear that the Greek government is planning a change of course but without creating new deficits or burdening tax payers in other countries, government sources said.
The Greek Premier thanked the Eurogroup chairman for his visit to Athens, expressing his conviction that he will relay a message of negotiation and good will for a new and mutually beneficial solution between Greece and its international creditors.
Tsipras also stressed that the government’s commitment to not derail balanced primary budgets was a given. “We do not want to create new deficits. But neither will we live with enduring social deficits. We are also committed by the popular mandate to implement our program, which is focused on the humanitarian crisis, kickstart the economy and restore employment,” he said.
According to the same sources, the Prime Minister expressed the government’s readiness to proceed with real reforms that will boost the public sector’s credibility, as well as combat tax evasion, corruption and political clientelism.
“On this front, we are ready to exchange ideas and knowhow,” he added, asking for the European official’s support in achieving stability and progress.
Regarding time frames, Tsipras stressed the need for enough time and fiscal margins to cooperate on a plan that will restore confidence, growth and employment, expressing his certainty that despite the fact that different views have been expressed by member-states on the debt issue, there will be initiatives to ensure its sustainability.
“I am confident that we can achieve an agreement. This will be positive for Europe and for you personally,” the Prime Minister told Dijsselbloem.