Michael Olaitan Returns Ten Months after His Collapse on the Field 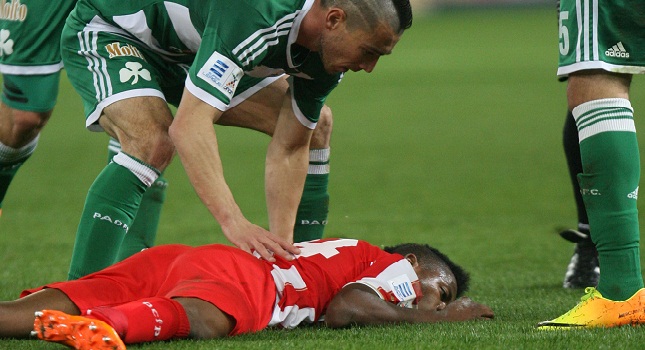 Nigerian striker Michael Olaitan returns on Olympiakos squad for the upcoming game against Tyrnavos for the Greek cup tomorrow. It’s been over ten months since his terrifying collapse at the Karaiskakis stadium.
It was March 2nd, 2014 at the 30th minute of the game against Panathinaikos, when the Nigerian youngster all of a sudden lost his conscious and dropped flat-faced on the floor. The rest of the players ran towards him, called the arbitrator to stop the watch and bring immediate medical attention to the player. His heart failed him for a moment bringing back memories of cases like Marc-Vivien Foe or Antonio Puerta who left their last breaths on the field. Thankfully, seconds later, he regained consciousness due to the field’s medical stuff’s care.
Ever since that day, the 22-year-old has remained on the pits, slowly recovering, till last month when he was back training with the whole team. Olympiakos new coach Vitor Perreira decided it was time for him to step back on the field in a “safe” game for the Greek Cup and get his confidence back to levels needed of champions.
https://www.youtube.com/watch?v=-uOWkZ-ck34