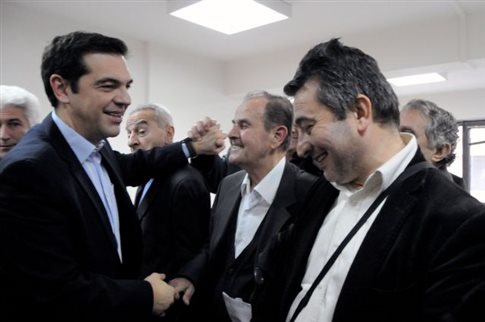 Among others, Tsipras committed to restore the returnee expatriates’ pensions that have been cut, as he highlighted, by the coalition government of Prime Minister Antonis Samaras and government Vice President and Foreign Minister Evangelos Venizelos.

“SYRIZA, as a wide, left, democratic and patriotic force, sees an integral part of Hellenism in the face of the emigrants – refugees of our country. It is committed to support expatriates with all its power and above all it is committed to restore the greatest injustice they have been subjected to by the Samaras – Venizelos administration; the ruinous cut of the meager pension of thousands of expatriates,” Tsipras highlighted during the meeting, adding that this commitment is among those measures announced in Thessaloniki International Fair (TIF), for the restoration of the ongoing humanitarian crisis.

“A country with millions of unemployed, homeless and people living in indignity is not a European country. It is a country that runs down to the standard of living of the third world. That is the reality. And I want to point out that the Thessaloniki program is not negotiable,” Tsipras said, explaining that the so-called “Thessaloniki program,” which will be based on national resources, has been carefully planned, giving priority to social issues and is based on the country’s current capabilities.

“Also, there is a second dimension on the issue; the moral one. All these years, we know that the people who returned from the former USSR are among the most progressive and creative elements of Greek society. They are people of moil who live on their savings and have never caused any problems to Greek society. We consider it our duty – a national and patriotic duty – to help for their final integration in the social and national body,” Tsipras concluded.