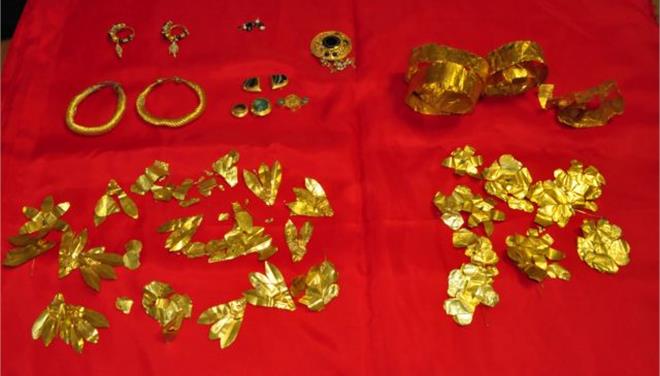 A Greek man in the northern region of Imathia was hiding gold jewelry and precious stones from the late Roman or early Christian period in his home’s attic. Greek authorities received a tip about the whereabouts of the ancient artifacts and raided the man’s house.
Police officers arrested the 59-year-old and retrieved the artifacts that had been hidden in leather cases under his house’s roof.
They were able to retrieve two golden earrings, a golden piece of jewelry with semiprecious stones and pearls, five semiprecious stones, two twisted bracelets and an elongated golden plate.
These items have already been classified as antiquities, however, further research is required in order to determine the type of metal they are made of and their origin.
Moreover, police officers discovered a metal detector and headphones in the man’s home, as well as leaf-shaped fragments that resemble the ornamentation used in Alexander-era crowns and ceremonial wreaths, a golden ring and ancient decoration objects that have been sent to the Archaeological Service for further investigation.
The seized antiquities have been put to storage, awaiting examination and final assessment, while the 59-year-old man was brought before the Misdemeanors Prosecutor of Veria, northern Greece, for violation of the Law on Protection of Antiquities and Cultural Heritage.