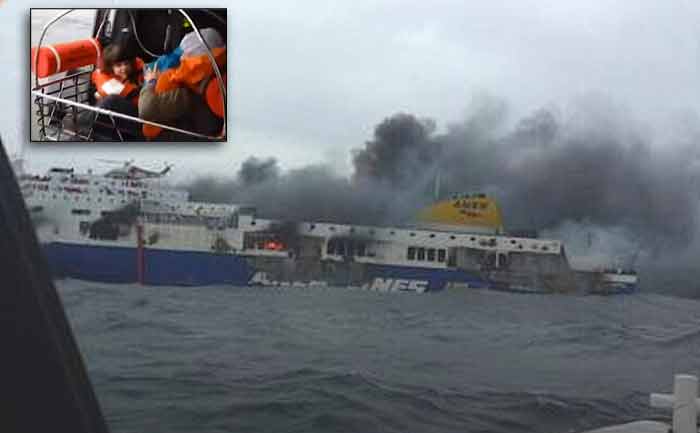 Some 165 passengers have been rescued so far from the Italian-flagged burning ferry-boat “Norman Atlantic,” which belongs to the Greek ferry line ANEK, sailing from Patras in western Greece to the Italian port of Ancona and was replacing the ANEK ferry which is normally executing the route but currently undergoing its annual maintenance. In addition, the Norman Atlantic also underwent its annual safety check in the port of Patras, but despite some issues detected was assessed as fit to sail. 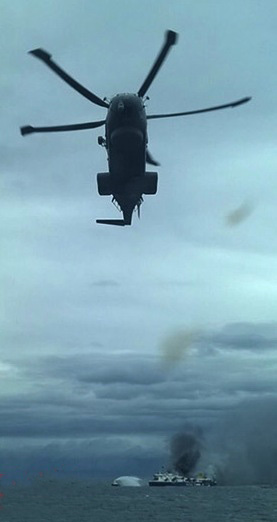 Regarding the ongoing safety operation, which is estimated to last through the night, rescue helicopters have already began lifting passengers off the burning ferry. The passengers are being lifted in pairs and are being transferred to the nearest vessels, officials explain. The total number of passengers was 411 and 55 crew members, while the number of helicopters participating in the rescue operation remain unknown. Officials say that two Greek and two Italian helicopters (Super Puma) are making repeated trips to the boat. Other sources, refer to a total of 478 passengers and crew, of whom 268 were Greek, while a Foreign Ministry official said there were also passengers from countries including Germany, Italy, Austria, Turkey, France and the Netherlands. Many of them are truck drivers.

Greek Maritime Minister, Miltiadis Varvitsiotis, said the very bad weather, with winds of up to 55 miles per hour blowing earlier, made the operation extremely difficult. “We are doing everything we can to save those on board and no one will be left helpless in this tough situation. It is one of the most complicated rescue operations that we have ever done,” he told reporters. 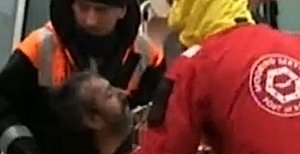 According to other sources, the still burning fire broke out in the exterior garage of the vessel and not in the interior ones. The Norman Atlantic has a capacity of carrying around 220 vehicles. Passengers talking to Greek television stations gave dramatic testimonies of conditions on the ship, which caught fire just before 6.00 a.m. local time, while traveling from Patras in western Greece to the eastern Italian city of Ancona: “I was with three others on board, now we’re all okay. At 6.30 a.m. in the morning, and while we were sleeping, we felt a strange smell in the cabin, but no alarm had gone off. Our cabin was on the sixth level. We opened the door and saw a lot of smoke down the corridor. The floor was red and burning! The alarm sounded much much later. The crew did not help us. While we were trying to climb the ladder, they gave us life jackets and we entered the raft. Inside the boat, we were 40 to 50 people, including young children. Within fifteen minutes, we had abandoned the ship. Panic prevailed because the people did not know what was happening. Did not know where to go,” one of the passengers, Mrs. Athina said on SKAI TV earlier. 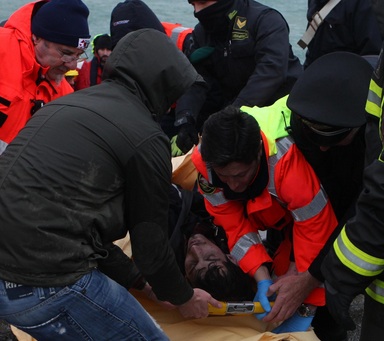 Mr. Fotis Tsantakidis, one of the survivors, spoke to Mega Channel and stated that the fire broke out simultaneously in more than one area, maybe two or three. “We heard the burst of car tires, explosions. There was no smoke alarm. Smoke was coming into the cabin. There was no moderation. There was no coordination,” the survivor said.

Furthermore, another Greek passenger, Mr. Giorgos Styliaras, also said to Mega Channel earlier: “We are out on the deck, we have frostbite and are choking on smoke. The boat is still burning and the floors are boiling. Some are trembling and others coughing from the smoke.”