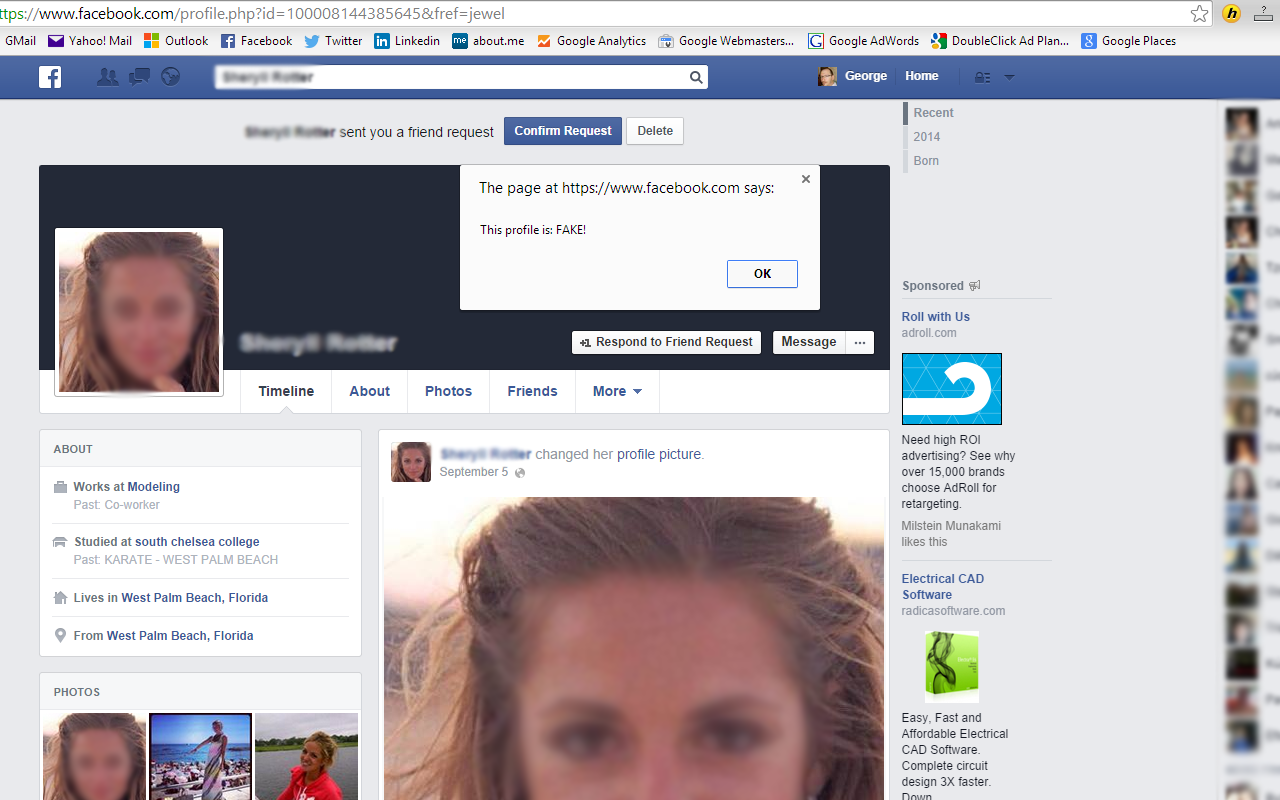 His aim is to tackle as many of the 81 million fake facebook profiles as possible, that most users have encountered at least once. The 30-year-old computer engineer from Corfu, Giorgos Delaportas, who created the unique program that automatically examines and classifies a profile as ”fake” within less than two seconds, explains to Greek Reporter what led him to the creation of ”FAKE FB – Fake Profile Examiner” and underlines the dangers hidden behind model-like profile photos that are simply… unreal.
”It was a while ago when I got fed up of repeatedly declining friend requests from fake users. Starting from annoying electronic hawkers, people hidden behind made up names and stolen photos can go far beyond that, to stealing personal information or blackmailing. Every time I was clicking ‘ignore’ I was thinking that there does not exist a program that could instantly classify the requests for me, before even accepting them. Two months after I got the last request from such a profile, ‘FAKE FB’ was finally developed,” Μr. Delaportas says.

Its installation as well as its use is simple, while the only condition is the use of Google Chrome as a web browser. To download it users can visit the Chrome Web Store where it is available for free, following three simple steps: Click on the blue ”installation” button, press ”OK” to agree with terms and conditions and the shortcut will appear on Chrome, restart the browser and ”FAKE FB” is ready to use.

”The program uses advanced A.I mechanisms and several metrics to examine profiles that look suspicious. It is so simple that it almost feels like magic,” explains Μr. Delaportas, adding that ”according to facebook official stats, there are at least one billion active users. It is impossible to figure out the purpose of each one of the strangers that might interact with you. Underage users are vulnerable out there and can easily become an easy ‘catch.’ One of the main reasons ‘FAKE FB’ was developed is to protect children, while it is impossible for parents to control every cyber step they take. In any case, younger users can now use the program to check if they should accept or decline friend requests from people they do not know.”
Being available for almost three months, ”FAKE FB” has managed to attract more than 550 users and Μr. Delaportas remains confident that this gap in users’ personal life protection will lead the program to success. ”I could not believe that there was not a single program for such a usual problem that all facebook users have to deal with from time to time,” he concludes.

It was on this day, February 26, one year ago that the first case of coronavirus was confirmed and officially announced in Greece.
Ancient Greece

The plague appeared in Greece as a weapon of divine wrath. Agamemnon, offended the priest of Apollo and the God spread pestilence among the Greeks.
Diaspora