TechNews
GreekReporter.com Europe Pope and Ecumenical Patriarch will not Accept a 'Middle East Without Christians' 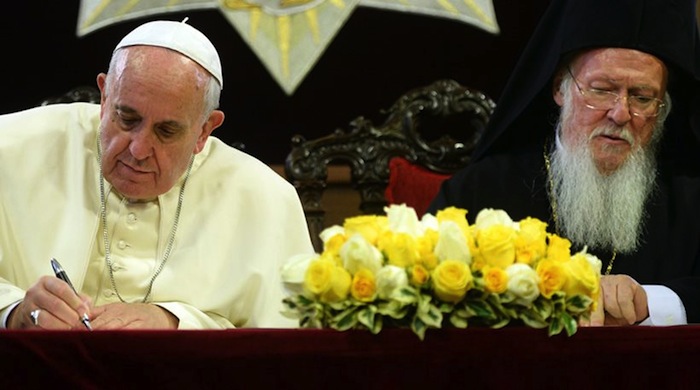 Pope Francis wrapped up his visit to Ecumenical Patriarch Bartholomew on Sunday by attending a Divine Liturgy at the Patriarchal Church of St. George in Istanbul and signing a joint declaration of the two Churches.

Pope Francis was enthusiastically greeted for a second time upon his arrival at the Ecumenical Patriarchate today, where he attended the Divine Liturgy to commemorate the Feast of St. Andrew the Apostle, the patron saint of the Church of Constantinople, the Byzantine name for present-day Istanbul. The Pope was received by Elder Metropolitan John of Pergamon and the Patriarchal Court, who escorted him to the special guest throne of the Patriarchal Church of St. George.

During the service, Ecumenical Patriarch Bartholomew and Pope Francis exchanged the kiss of peace, a symbol of reconciliation and love, and the Lord’s Prayer was read by Pope Francis in Latin.

They signed a Joint Declaration with consequential importance for Christian unity and momentous impact on the suffering of Christians in the Middle East.

Most of the statement was dedicated to the crisis in the Middle East, the “ecumenism of suffering” especially in Iraq and Syria, as well as the conflict in Ukraine. The two leaders underlined:
We cannot resign ourselves to a Middle East without Christians, who have professed the name of Jesus for two thousand years over there. Many of our brothers and sisters are being persecuted and have been violently forced from their homes. It even seems that the value of human life has been lost, that the human person no longer matters and may be sacrificed to other interests. And, tragically, all this is met by the indifference of many.

In regards to the dialogue with Islam, the Pope and the Patriarch noted:
The grave challenges facing the world in the present situation require the solidarity of all people of good will, and so we also recognize the importance of promoting a constructive dialogue with Islam based on mutual respect and friendship. Inspired by common values and strengthened by genuine fraternal sentiments, Muslims and Christians are called to work together for the sake of justice, peace and respect for the dignity and rights of every person, especially in those regions where they once lived for centuries in peaceful coexistence and now tragically suffer the horrors of war together.

Finally, the two leaders expressed their concern about the ongoing crisis in Ukraine:
We also remember all the people who experience the sufferings of war. In particular, we pray for peace in Ukraine, a country of ancient Christian tradition, while we call upon all parties involved to pursue the path of dialogue and respect for international law in order to bring an end to the conflict and allow all Ukrainians to live in harmony.