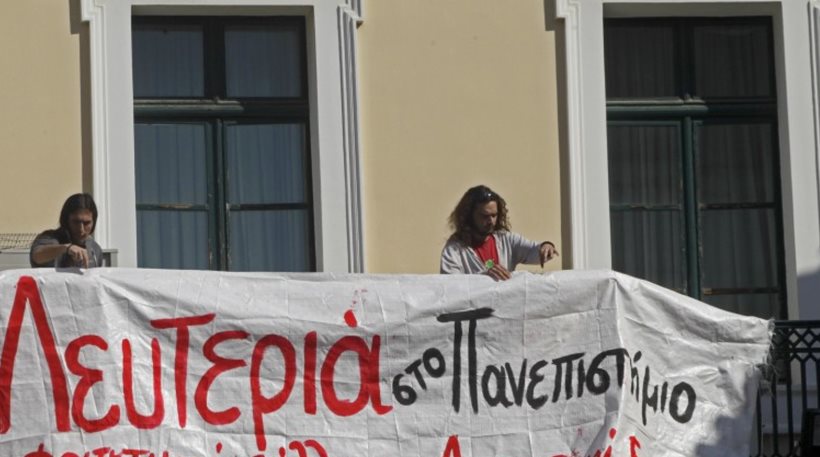 A new wave of occupations of university buildings has started as students protest against the rectorate’s proposal that student issues should be decided by electronic voting.
So far, four university buildings have been occupied by students, Specifically, the Athens Law School, the Rectorate of the National Technical University of Athens, Greee , the Rectorate of Health Sciences, and the School of Economics. With this action, university students want to oppose the proposal of the National Kapodistrian University of Athens rector, Theodoros Fortsakis, for students to vote electronically by department on their issues.
Several student factions claim that electronic voting aims at shutting down student unions. They also say that the rectorate should not interfere on issues that only concern the students and their decisions. On Thursday morning, a student union that belongs to the Greek Communist Party (KKE) occupied the Rectorate of the University of Athens. Several student unions hold meetings to decide on further actions. So far, they have decided that there will be no classes on Thursday and Friday.
The rector and vice-rectors issued the following statement, “In a democracy, the violent occupation of university premises (and the standing risk of damage as has repeatedly occurred in the past) cannot be tolerated, nor can the tampering with democracy in various ways, but precisely in the spirit of the Polytechnic uprising of 1973, there is an urgent demand to reinstate simple reason.”
The announcement adds that electronic voting by department would finally give the student majority an opportunity for everyone to directly decide whether to suspend classes, as some propose and then impose. The rectorate claim that combative student factions that are the minority of the student body impose their decisions by force.
Yesterday student unions clashed at the Athens Law School. Students who belong to the New Democracy student union announced that they were attacked by a leftist student union who didn’t allow them to enter the school using violence.
Leftist student unions accuse rector Theodoros Fortsakis of trying to impose a fascist rule in universities and ask for his resignation.

Golden Dawn MEP Lagos to be Extradited to Greece Saturday