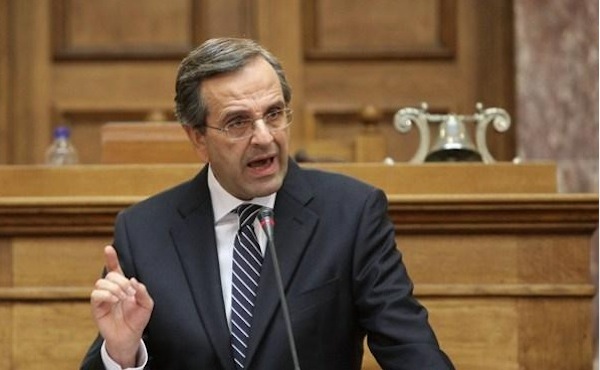 A message with multiple recipients was sent earlier today by Greek Prime Minister Antonis Samaras during his message for the “Oxi” national holiday. In his official statement, Samaras underlined that the nation will now be able to move forward, the long-awaited restoration of the economy has been achieved and that Greek people’s sacrifices have already brought results.
“Greeks on October 28 honor those heroes who did not hesitate to even offer their lives for Freedom, Democracy and Human Dignity; those who fought against fascism and Nazism, leaving an indestructible legacy to all of us, those who made the Free World talk about the greatness and the offer of Greece to the common struggles,” Samaras said.
“The epic of the ’40s, recorded in the brightest pages of modern history, inspires and teaches. It gives us all an opportunity to be taught about unity and commitment to the last battle for our country’s exit from the greatest economic crisis in our post-war history”, he added.
“We now move, with faith in our Homeland and trust in Greeks, with solid and confident steps to achieve the restoration of the economy and uplift of our society. The sacrifices made by all of us have already brought tangible results. The start has been made and nobody can stop us. The victory in this relentless conflict will be for all Greeks; because all Greeks will now be able to move in new ways for prospect and hope”, he concluded.