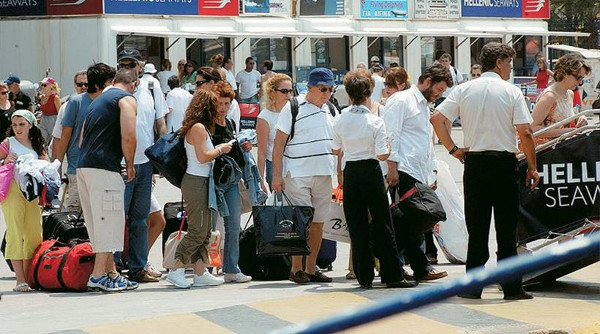 The Greek tourism sector is probably the only sector that has successfully “resisted” the economic crisis of the past six years.
Addressing the annual conference of the Association of Greek Tourism Enterprises in Athens, Greek Prime Minister Antonis Samaras vouched that “tourism is Greece’s great support during hard times and remains the engine for the Greek economy.”
“The sector is breaking one record after another in quality and quantity, and will bring jobs and revenues to the state as long as Greece keeps to its steady course,” he added.
TUI, an international travel agency, plans to extend its summer season in Greece next year in a bid to match this year’s bump in vacationers to the country (10 percent).
This was confirmed by Peter Long, president of TUI, who addressed the Association of Greek Tourism Enterprises conference. He vowed that his agency alone would bring 200,000 more tourists to the country than last season.
“We will continue to invest in the future of Greece, working in close co-operation with the government. This includes trialling an earlier start to our 2015 summer season,” Long stated.
Long noted that Greece is considered one of Europe’s top destinations and pledged that his agency would continue to promote Greece.
“Our target is to build upon this strong position to support further growth in Greece and to drive this country’s tourism industry to the next level,” he said.
Long also called for greater cooperation between local producers and hotels to help boost revenues and increase customer satisfaction.