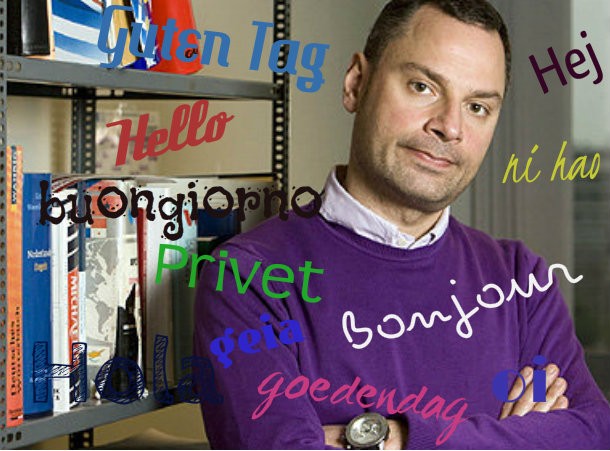 Could a Greek become a new top candidate for the “Guinness World Records” list of most languages spoken? Ioannis Ikonomou, a translator who lives in Brussels and works for the European Commission, speaks 32 languages, all of them fluently. His urge, he says, is to keep learning more.

“The EU Commission urgently needs translations of confidential documents from Hebrew, Chinese and Azerbaijani. Very few of the EU’s 2,500 translators can handle that. Ikonomou is the best of them all. He speaks 32 languages virtually fluently, including a pair of dead languages,” reports one Worldcrunch.com article.

Ikonomou, 49, doesn’t know whether 32 languages would put him in the Guinness World Records Book. His career developed simply out of curiosity, he says, sipping a green tea. “That’s a keyword for my life.” He “didn’t play soccer, and most school subjects bored him. He preferred to delve into the world of unknown words.”

Ikonomou speaks 21 of the EU’s 24 official languages. “I forgot my Lithuanian, and I didn’t have time for Gaelic or Maltese,” he admits. He understands not only modern languages, but also a few old ones — Latin, Old English, Mayan, Old Irish and Old Iranian. “Language is like love,” he says.

Ikonomou’s work primarily involves translating official documents. But on his way to the office every morning he tunes in to worldwide chats, Internet TV and radio. He always does so in various different languages.

He learned English at age five, German at seven, Italian at 10, Russian at 13, East African Swahili at 14 — “just for fun” — and Turkish at 16. “I didn’t want enemies,” he says. “I wanted to be able to talk to people.” At the time he was learning Turkish, there were no Turkish textbooks in Greece. “So my parents found Mrs. Ayse, an architect who had emigrated from northern Cyprus. She was strict,” he recalls.

After Turkish, he learned Arabic and became a Sufi, a type of Islamic mystic. “The rules of a language are only the beginning for me,” he says. “I want to understand everything — the food, the music, the religion, the traumas of a people.”

Next, Ikonomou became fascinated by India. He studied Urdu, Hindi and Sanskrit. For 18 years, he was a strict vegetarian and devoted his life to Hindu teachings.

“Chinese is my favorite language,” he says. “It’s completely different, the Mount Everest for Europeans.” He’s traveled to China several times; every trip, he learns a bit more of the language. Now he wants to learn Albanian. The country recently became a candidate for EU membership. “I always need an incentive,” he says. Within three months, he plans to be able to understand the news on Albanian radio.

“For several months I’ve been focusing on Albanian, learning words, making cross connections,” he continues. “Then I store them and use them right away in chats or when I read the newspaper.” This method, which he calls “total dedication,” is the key to his success.