Fyssas Murder: How Authorities Connected Golden Dawn to the Killing 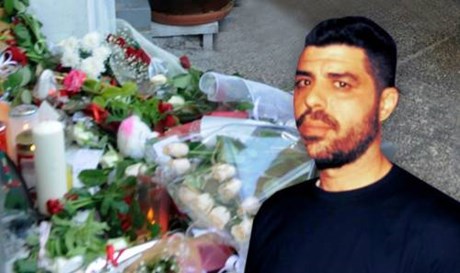 September 18, 2013: Pavlos Fyssas is stabbed by Golden Dawn member Giorgos Roupakias in the Keratsini area of Piraeus. The assassination marks the beginning of the “unveiling” of Golden Dawn’s political-criminal activities.
The Greek public is jolted by the incident. Once the initial shock wears off, the anti-fascist demonstrations begin – not just in Greece, but in cities throughout Europe. The rapper’s death site becomes a rallying point. Revelations regarding Golden Dawn’s criminal activity soon follow. In the wake of the brutal murder in Keratsini, it becomes clear that the murder was politically motivated.
The 34-year-old musician had gone with his fiancee and friends to a cafeteria in the area of Amfiali to watch a football match of his favorite team, Olympiakos. A discussion began in which Fyssas allegedly made a provocative remark about Golden Dawn.
The rapper left the cafeteria after the match was over; according to eye witnesses, a gang of Golden Dawn members was waiting for him to ask why he had made the provocative remark about their party. About 30 Greek Golden Dawn members in military trousers gathered outside the cafeteria. Two were holding batons. Fyssas started to walk to Panagi Tsaldari street with his fiancee. Greek Police forces of the DIAS motorcycle group reached the area but, because they were afraid to interfere, they decided to stand aside. The offender, Roupakias, approached Fyssas and stabbed him in the chest.
Immediately after Roupakias pulled the knife, a female DIAS officer threw him to the ground and handcuffed him. Fyssas did not make it, however; he died on the street, next to his fiancee. Roupakias has since admitted that he is a Golden Dawn member. From that point forth, the group’s “criminal activities” have been gradually unveiled. According to investigations, Golden Dawn members had “called” the gang to commit this murder. Golden Dawn correspondence and SMS messages subsequently gathered by Greek Police have revealed shocking details not only about this murder, but about the “provocative actions” of other Golden Dawn members. Several have been arrested, including Golden Dawn founder and leader Nikos Michaloliakos, and currently sit in Korydallos prison, awaiting trial. 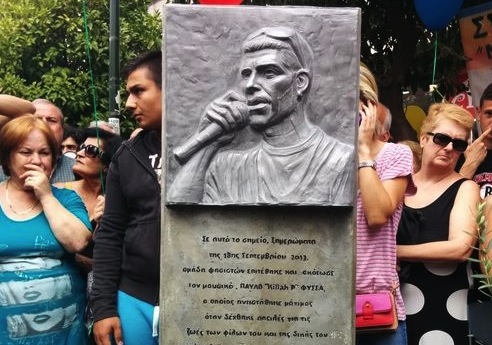 Monument for Fyssas
A monument in honor of Fyssas at the murder site in the western Attica district of Keratsini was unveiled this afternoon during an antifascist protest and march by Fyssas’ friends, locals and fans.
Fyssas’ mother cried “Sing, my son” over the monument and his father said that he is fighting fascism, while his son rests in peace.
Antifascist groups and other organizations also held events around Athens and other Greek cities to mark the first-year anniversary since the musician’s death.
An antifascist concert has been scheduled for Friday, 5:00 p.m., at Syntagma square, with the participation of more than 30 artists.