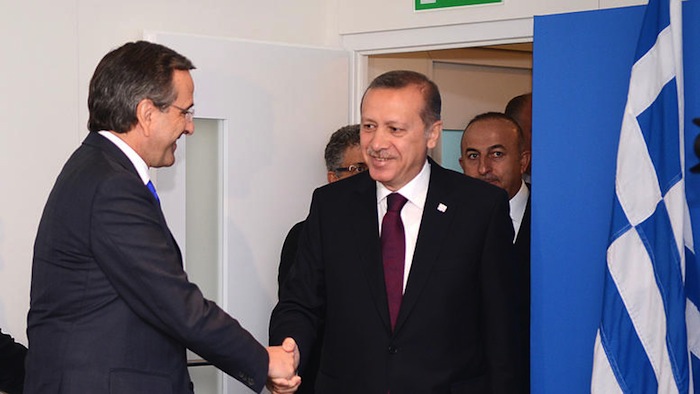 The meeting between Greek Prime Minister Antonis Samaras and Turkish President Recep Tayyip Erdogan held in Newport, Wales, on the sidelines of the NATO Summit, was completed in early afternoon on Friday after lasting 40 minutes, in a rather “negative climate,” according to reports.
The Greek Prime Minister was accompanied by government Vice-President and Foreign Minister Evangelos Venizelos and government spokesperson Sophia Voultepsi.
The Turks wanted to play down recent comments made by Erdogan on Cyprus that sparked a strong reaction from Greece’s Foreign Ministry, according to Friday reports.
During a visit to the Turkish-occupied part of Nicosia earlier this week, Erdogan called for a two-state solution for the divided island while claiming that Greece was not “doing its duty” as a guarantor power to break the ongoing deadlock.
The Greek premier made special reference to recent statements by Erdogan during his visit to the occupied areas, where he spoke of a solution of ‘two founding states’. The Turkish president had also called on Greece to take on its responsibilities as a guarantor power in the peace process.
Samaras argued that such statements undermine the talks and the prospects of a solution.
However, according to reports, Erdogan stuck to his position on two states, triggering a response from Samaras who reiterated that Cyprus is a member state of the EU.
“Well Mr President, we are facing a real problem, a real difference,” Samaras reportedly said.
The newly-elected President also said Ankara would allow the reopening of a former Greek Orthodox seminary near Istanbul if Greece permitted the construction of traditional mosques with minarets in Athens and allowed Muslim communities in Thrace, northern Greece, to directly appoint muftis.
Greek Foreign Ministry spokesman Konstantinos Koutras responded by slamming Ankara’s “aggressive policy” on Cyprus and accused Erdogan of trying to “equate certain of Greece ’s international obligations with Turkey’s heavy burden of responsibility regarding the Cyprus problem.”
In a statement, Turkey’s Foreign Ministry has reportedly expressed its “astonishment” over Koutras’ remarks, attributing them to domestic policy considerations.
The Ministry reportedly added that the interpretation of Erdogan’s statements by officials in Athens does not reflect the spirit of cooperation that has recently been established between the two sides and which Turkey wishes to maintain.
“Turkey will always continue to be one step ahead in this process, in cooperation with the United Nations primarily, the other guarantors and interested countries,” the Ministry said, according to reports.