GRNews
GreekReporter.comGreeceSamaras-Erdogan Meeting on Sidelines of NATO Summit in Wales

Samaras-Erdogan Meeting on Sidelines of NATO Summit in Wales 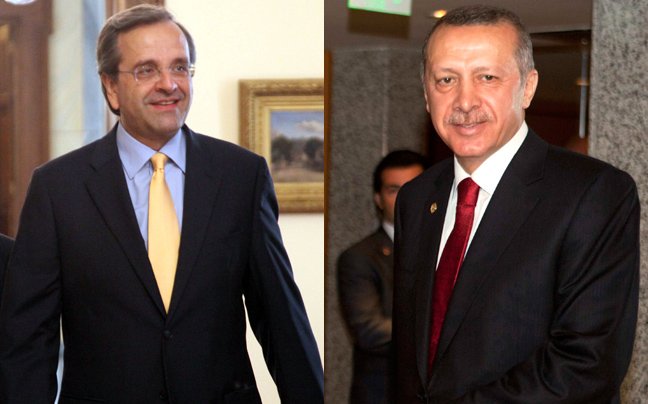 Prime Minister Antonis Samaras will be in Wales today, attending the two-day NATO Summit. The Greek PM will be accompanied by Government Vice-President and Foreign Minister Evangelos Venizelos and Defense Minister Dimitris Avramopoulos, who will hold meetings with their NATO counterparts.
The Prime Minister is expected to meet with Turkish President Recep Tayyip Erdogan on the sidelines of the NATO Summit, following a request from the Turkish side. The meeting was pending for the past two months and will take place in a tense atmosphere as a result of statements made by Erdogan on the Cyprus problem during his recent visit to the occupied part of Cyprus.
The Turkish president’s statements came as an unpleasant surprise to the Greek government that was expecting Turkey to adopt a more constructive stance in the ongoing negotiations.
In this context, the Samaras-Erdogan meeting will focus on the Cyprus problem and Greek-Turkish relations, with the Greek side seeking to ease tensions and promote Greece’s agenda.
Samaras had a long discussion with Cypriot President Nicos Anastasiades on Wednesday morning, focusing on the Cyprus problem talks and reaffirming the close cooperation between Athens and Nicosia. They also referred in detail to Samaras’ talks with Erdogan and alliance leaders, as well as the meetings that Venizelos and Avramopoulos will have with their counterparts.
In a meeting held earlier on Wednesday at the Presidential Mansion, Samaras briefed President of the Hellenic Republic Karolos Papoulias on the developments in the Cyprus problem ahead of the NATO Summit.