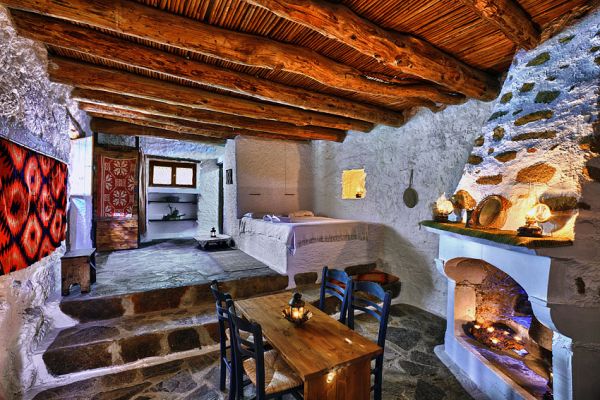 Aspros Potamos, a 300 hundred year old abandoned settlement in Crete, Greece, has recently being transformed into a hotel, whose amenities (or lack of) will have you traveling back in time.
Built from natural local stone and reflecting the color of the earth the complex is considered an ideal relaxing destination near the beach as well as the mountain. This very special accommodation is clustered on the side of hillside within the hamlet of Aspros Potamos with uninterrupted views up the gorge towards Pefki and down the valley to the Libyan sea.
The settlement that historically dates back to Venetian times is said to have been quite larger, before pirate attacks forced its inhabitants to leave a long time ago.
At the time there were few olive trees, no tourism and the land on which the villagers grew their crops was at a much lower level than where the village stood.
The villagers had built small, very basic cottages consisted of only two rooms – one for family and one for the animals.
The cottages, originally 20 dwellings without bathrooms or toilets, were left for many years to the mercy of the weather and nature until they were purchased by its current owners in the 90’s.
The current owners recently renovated and restored the traditional houses turning them into an eco-friendly complex with rooms for rent. Paying great attention to detail and using stone and wood, they managed to keep the structure’s original character.
The interior of the houses is also built with respect to the old tradition.

The decoration is simple and plain using traditional objects such as small tables, old wood, accessories for traditional bread making, old woven fabrics and pots and pans. Beds made from stone, original windows and bedrock walls, ceilings of crossed beams, use of straw and soil for insulation, all help to create their traditional style. The houses are connected by a network of traditional stone paths. Thick outer walls made of stone and rock keep the houses cool in the summer and warm in the winter.
The rooms are lit with oil lamps and candles and there are no electrical devices or power outlets in-house. Guests have access to power outlets in the reception area, the only place that has electrical power. There is also a library which offers Wifi network free of charge.
Another unique element of the cleverly restored facility is that the houses are above one another and their roofs are used as balconies for the upper house.
The earth-friendly complex uses only renewable energy sources and generates its electricity used in the common areas by a photovoltaic system.

Whether you are a hiker, a nature lover, or just someone who is tired of the stressful routine of big cities and wishes to have a different kind of vacation, Aspros Potamos is the place to visit.