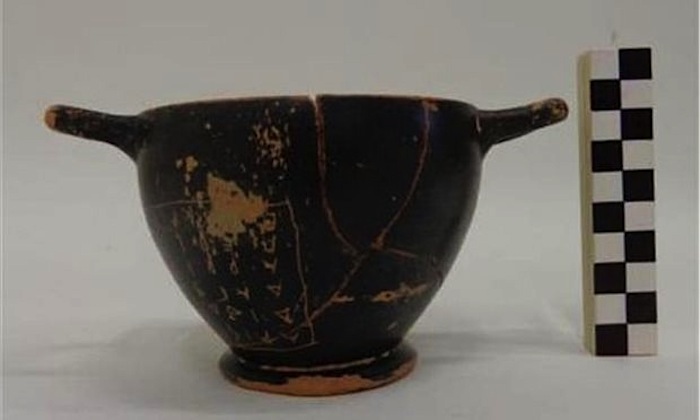 A wine-cup believed to belong to ancient Greek politician Pericles was discovered on Wednesday in an ancient tomb, in Kifisia, northern Athens, Greece.
The ancient tomb came to light during excavations for the foundations of a new building. The wine-cup, measuring 8 centimeters in height, was found shattered into 12 pieces.
After the archeologists put the pieces together, they were surprised to find the name “Pericles” engraved under one handle, along with the names of five other men, Aristides, Diodotos, Daesimos, Ariphron and Efkritos.
Archaeologists are “99 percent” sure that the cup was used by the Athenian politician and that Ariphron was Pericles’ elder brother.
“The name Ariphron is extremely rare. Having it listed above that of Pericles makes us 99 percent sure that these are the two brothers,” Angelos Matthaiou, secretary of the Greek Epigraphic Society, told newspaper Ta Nea.
The cup was likely used in a wine symposium when Pericles was twenty years old and the six men who drank from it engraved their names as a memento, Matthaiou said.
According to archaeologist Galini Daskalaki, the cup was then given as a gift to another man named Drapetis (escapee in Greek) who was possibly a slave servant or the owner of the tavern.
This rare and important finding will be displayed in the autumn at the Epigraphical Museum in Athens.
Pericles was born in Athens in 495 BC. He was one of the most eminent and revered figures of ancient Greece as he reigned during the Golden Age of Athens. He died of the plague in 429 BC during a Spartan siege.