GRNews
GreekReporter.comGreeceWorld Cup: 8 Moments that Made our Hearts Jump (Video)

World Cup: 8 Moments that Made our Hearts Jump (Video) 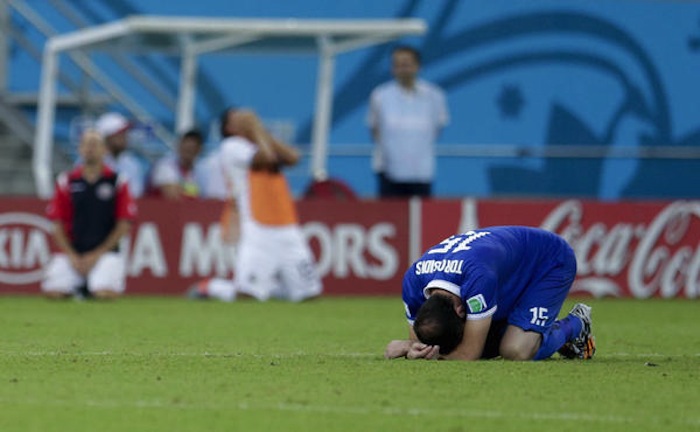 The 2014 World Cup knockout stage matches surprised soccer fans around the world. Here are a few moments that made us jump out of our seats.
The 2014 World Cup held in Brazil is heading in its last 10 days of football, with a remaining 8 games to be played. A statistic to be noted is that only the teams that finished top of the 8 groups advanced to the quarter finals. Brazil is still the bookmakers’ favorite at 3/1, while Argentina and Germany follow with 4/1 and 9/2. None of the above mentioned teams qualified during regulation time so extra-time or penalties had to be held to determine the winner.

1. Brazil beat Chile in the penalty shootout in the first of the games that were held in this round. David Luiz kneed the ball in and gave Brazil the lead, just before Sanchez equalized in the 32nd minute. The game first went to extra time, where Chile missed their biggest chance when Pinilla fired a cracker that hit the bar and then to penalties, where Julio Cesar saved two shots and gave the win to Brazil.
2. Argentina, who still struggles to produce impressive football but still manages to clinch the wins, scored the 2nd latest ever goal to determine a game when Angel Di Maria scored in the 119′ to pass over Switzerland. The Swiss had Dzemaili’s header hit the post in the 120th minute.
3. Germany also struggled over tough opponents Algeria, who kept the game at minimum score until Chelsea’s Andre Schurrle found the back of the net at the 92nd minute of extra time. Mesut Ozil doubled the lead and Algeria just managed to bring one back in the last minute of overtime.
4. Holland qualified by scoring 2 goals in the 88th and 94th minute with Sneijder and Huntelaar to cancel out Mexico‘s Giovanni Santos’ strike in the first half.
5. Colombia eased through Uruguay with James Rodriguez netting in a double and checking in as top scorer of the tournament.
6. France needed two late goals with Pogba and Yobo to eliminate the Nigerian side.
7. USA fought hard but in the end fell to dynamite Belgium in extra time with 2-1 but could’ve grab the win if Chris Wondolowski’s shot had gone in a minute before the end of the regulation period.
8. Last but not least, the surprise of the tournament Costa Rica, held a 1-1 tie against Greece with a man down for almost an hour, before advancing in the quarterfinals with a powerful display of goalkeeper Navas K in the penalty shootout.
Quarter-finals
Brazil vs Colombia
Holland vs Costa Rica
Argentina vs Belgium
France vs Germany
Top Scorers
5: James Rodriguez (COL)
4: Messi (ARG), Muller (GER), Neymar (BRA)
3: Benzema (FRA), Van Persie (HOL), Robben (HOL), Shaquiri (SWI), E. Valencia (ECU)