The Food of Ancient Cretans 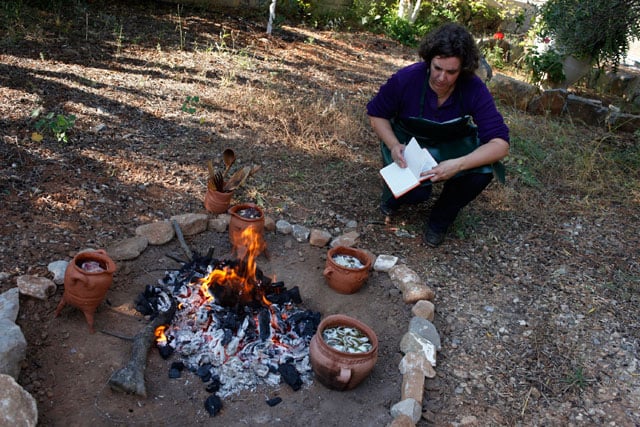 The American anthropologist and archaeologist, Jerolyn Morrison, stated that 100 years ago, Cretans used to eat food that was more similar to the food of Minoan Crete than to the food of modern Greece.
Furthermore, in order to demonstrate the Minoan and Byzantine cuisine of Crete, Morrison organized a symposium which was held last weekend at the American Farm School. The attendees had the chance to taste the food of ancient Cretans, which had been cooked in replicas of the utensils used during that era. The menu consisted of lentils with coriander and honey, snails sautéed with rosemary and black pig fillet with carob, cooked in a clay replica of the Minoan grill.
“There are many foods that we eat today, that they used to eat in Minoan Crete” she says. “During both the Minoan era, and in modern Crete, people consume food from the sea, such as small and large fish, barnacles, cuttlefish and sea snails. They also ate meat from animals they bred or hunted such as goat, sheep, hare, pigs and cattle, while in later Minoan periods they also ate wild deer. Excavations have brought to light the fact that they used to eat many legumes, such as lentils and beans, cereals such as barley and zea, fruits and nuts, such as figs and almonds and of course there was evidence for producing olive oil and wine! I believe that the Cretan diet from 100 years ago was more like that of the Minoan era than modern Greece. This is a result of the lack of refrigerators, forcing inhabitants to use various forms of traditional food preservation and also the small-scale vegetable crops formed their eating habits which may resemble those of the Minoan civilization,” she noted.
“This is the exciting and creative side of archaeological studies! The Minoan civilization was prehistoric and we don’t have any written evidence concerning their food habits. Whilst we can learn what Minoans used to eat and how they cooked, we have limited knowledge of what the social habits were or the customs in relation to food and organizing the house. For example, we know that they cooked and ate both inside and outside of their homes, while they set up their tables in specific locations on the roof of their homes, but we have no data yet on how many different dishes were offered during dinner, the amount of food that was served at diners, or how many times per day or week they used to cook. We don’t know if they preferred savory, sweet or sour flavors” said Morrison.
Jerolyn Morrison has been looking into the ancient Minoan cooks for a few years and based on current scientific knowledge, she creates culinary experiences which “translate” the ancient language of food for modern people around the world.
According to the archeologist, Minoan cooking is not only about good products, one must also prepare the food with the same utensils used by ancient Cretans.